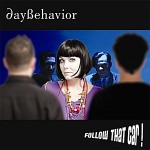 In the long standing tradition of Swedish musical spirit, that like genetic predisposition unites acts from ABBA to Kiethevez, Daybehavior with their third album continues to confidently realize the infatuating routine of electro-pop glamour. Not without stumbles and not without rehashing some predictable motifs, Follow that Car! nevertheless manages to deliver a fair share of spontaneous and elevating joy.

“Come to Bed with Me” opens the album, at once instantaneously memorable and arguably the most straightforwardly appealing track on Follow that Car!. The eclectic, dreamy mix of melodic synths and delightfully magnetic vocals of Paulinda Crescentini make up a remarkably nourishing hit that echoes the now ubiquitous, detached electronic romanticism of post-Drive retro pop. Injected with a similar cocktail of cool rhythms and emotional gravitas, “So Shut Your Eyes” unravels equally well only to be bested by “Silent Dawn,” a swaying, rich composition that transports Daybehavior to a haunting soundscape of whispered promises and lush, Enigma-esque textures. The cinematic connection that is employed, yet again, to aid and contextualize the content of the album comes to prominence on “The Blue Film,” which to a dramatic effect broadens Daybehavior’s musical horizons by way of moody instrumentation and dialogue samples. Sadly, the film noir quality that carries over to “A Train to Moscow” is not enough to reanimate its lifeless, unsurprising structure and like some other, less inspired moments on Follow that Car!, the track is accessible, well produced, but less imaginative than some of its highlights. Listening to “City Lights” reveals the lyrical issues that permute this less successful portion of the album. The mixture of simplistic rhymes and forcibly squeezed syllables detract from the charm of the adequate melody. The stumbling tone of album’s first single, “It’s a Game,” which overlays the awkward literary content on top of a beeping disco tune, stands in stark and unflattering contrast to other, more atmospheric songs. It’s not inconceivable, though, that among the album’s track list, favorites will emerge independently since the faultless production and confident realization of pop principles render all songs as potential candidates, immune to all but the most personal of criticism.

From the sensual masculine/feminine duality of “For a Thousand Years” to the unabashed cheerfulness of “No More Minutes,” listeners are given an abundance of well written material. Between the tracks that stimulate you, haunt you, or entertain you, there is definitely something that every fan of electro-pop will be able to take away and cherish. Daybehavior’s return after nine years of hiatus might not bring a revolution or set a genre milestone, but Follow that Car! is a fantastic display of artistic confidence and undeniable talent.