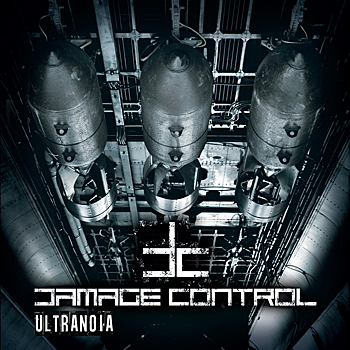 Damage Control
Category: Industrial / Electronic
Album: Ultranoia
Blurb: A group of transoceanic artists have joined up to deliver a noteworthy collection of songs, and the music world is starting to take strong interest as they unleash their unique and amazing musical creations.

Damage Control – comprised of Bill Barsby, Damian Davis, Jason Podmore and Markus App – is a collective of seasoned songwriters and producers that came together from different parts of the world in 2012 to remotely collaborate. With their combined knowledge of music production, and with the engineering skills of Greg Reely, the quartet was able to conjure bold and innovative sounds with the final product of all this hard work being the release Ultranoia. The album, mixed and mastered by veteran industrial musician Chris Peterson (Ohm, Front Line Assembly, Noise Unit, Delerium), also packs the firepower of some heavy hitting artists for brilliant collaborations, resulting in what Podmore calls, “nothing but A-Game.”

Ultranoia begins with “After the Fire,” and this song sets the perfect tone for the album: experimental, heavy, and bold. It could be said that tracks like “Hate Crime,” “World in Decline,” and “City of Ruins” give Ultranoia a lot of its heavy EBM and electro/industrial backbone with fierce, hard-hitting rhythms, intricate programming, and electronically stylized vocalization. Damage Control also managed to bring to life a very old school sound in some of the songs that really does the style justice, like in “Reasons,” which almost sounds reminiscent of old Skinny Puppy and Front Line Assembly, while there are other more experimental elements like on “Ghost In The Attic” and “Trauma,” which vary more in the creative elements and arrangements, bringing a fresh and crisp electro/industrial approach. As stated, the guest collaborations in Ultranoia are also nothing short of impressive, with Ohm’s Chris Peterson and Craig Huxtable adding an ingenious contribution to “Angst” and the dance floor killing “Hate Crime” remix by Leæther Strip.

The members of Damage Control poured their heart and soul into the making of Ultranoia, and that is evident in the quality of the sound and mastering of the album. The rich soundscapes can be heartily appreciated in every track, and the touches by Peterson and Reely just add to the excellence in overall production. This is a superb addition to any avid music lover’s collection and we can only hope to hear more in the future from Damage Control, but if this release is an indication of future things to come, then listeners are in for a real audio treat.