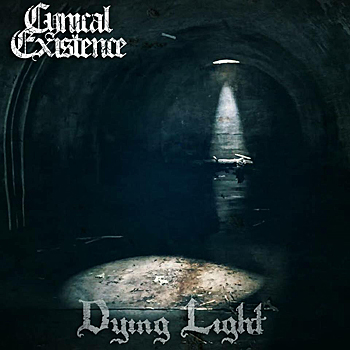 There are few things more gratifying to see and hear a band or artist that is willing to evolve and explore past the confines of the initial core that audiences immediately identify with. Such is the case with Cynical Existence as on Dying Light, Fredrik Croona and George Klontzas infuse a deeper incorporation of guitars – courtesy of Erik Gustafson (Adoration Destroyed, 16volt) – into the band’s sound, all the while maintaining the harsh electro/EBM sound that made the band a staple for the modern dance floor. To the band’s credit, while some might see this juxtaposition as nothing new compared to similarly minded acts in the genre and perhaps be tempted to say that Dying Light has its club-friendly tracks and its heavy metal tracks, this would be too simple a dissemination of what the album has to offer. For instance, the introductory single “Through My Eyes” is a slower paced track that is as heavy on the guitars as it is on the icy synth leads and atmospheric pads, with the beats punching through the mix to entice one to the dance floor. However, tracks like this, “As I Break Down” with its emotive vocal harmonies amid sustained power chords and spacious beats, and “As the World Stops” with its rhythmic waxing and waning as the guitars underscore the simple but shimmering synth patterns evoke a much more gothic quality that does well to expose the band’s songwriting strength. Oh, but there are the heavy metal tracks like the opening “Edge of Sanity,” its chorus striking and catchy and the riffs up front and in-your-face atop the solid dance beats to immediately engross the listener in the power of Cynical Existence, with songs like “Thank You,” “Hate by Design,” and “End of the Line” following suit. Other songs like “Fuck Your Crew” and “I” are much more electronically minded, for while the guitars remain, they are clearly textural to allow the seething synth leads and pumping beats to take prominence. Dying Light is an album that manages to balance extremes into a cohesive package; this applies to the vocals as much as to the instrumentation as the switch between the raspy howls that dominate most of the songs to the clean harmonies in songs like “Edge of Sanity” and “Hate by Design” is quite engaging. This writer actually would’ve preferred more of this combination, but it does little to diminish the album’s quality and does leave room for a greater exploration of this vocal styling on future releases. As it stands, with three additional remixes to round out the album, Dying Light is anything but what its title suggests as it demonstrates the vitality of production and songwriting that Cynical Existence is capable of. Well done!