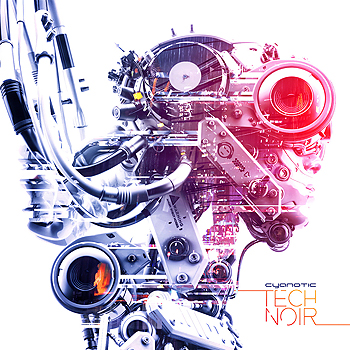 Cyanotic
Category: Industrial / Coldwave
Album: Tech Noir
Blurb: Streamlining the established coldwave sound to offer a tighter and more advanced sonic creation, this ninth studio release from Cyanotic proves to be one of the band’s most powerful yet.

After such a mammoth release like the two volume Worst Case Scenario album, one might wonder where a band like Cyanotic could take its artistic and technological development. Rising to the challenge, Sean Payne and longtime cohort Kevin Barron set about reinventing the band, streamlining established methods into a tighter and more advanced creation to truly become “part band / part machine.” With Tech Noir, Cyanotic presents the merger of the synthetic with the organic in a manner more mechanized and menacing than ever before; gone are the guitars, opting for a more synthesized approach that loses none of the intensity or virulence.

The clamor of distant metallic clanks gives rise to a pounding industrial beat, a bristling synth progression and stuttering effects enter full of venomous anticipation, and once Payne roars “Feel the tension rise,” “Mainlining Tension” is established quickly as an instant Cyanotic classic. The same can be said of “Deadweight,” its shrill synth effects set to kill amid an addictively danceable beat, sustained riffs of distortion and squelching leads meshing with Payne’s voice like a cybernetic juggernaut, while “Hyperaware” threatens to send your pulse into overdrive with rapid fire beats and bass lines perfect for racing through the urban sprawl at top speed, with Payne assuring you that “The only way out is through.” Other tracks like “Survival Instincts” with its insistent, factory-like rhythms and “Surveying City Ruins,” full of fluid, creeping bass lines and guttural arpeggio riffs punish the listener with furious robotic foreboding, subtly hinting at Cyanotic’s hip-hop influence. “Clear a Path” is refined from its original single version into a meatier dance track, a throbbing distorted bass line atop a bouncy tribal loop establishing a firm groove, the glitchy vocal effects and samples reminding this writer of Front 242’s “Commando Mix,” while the lush and electrified atmospheres of “Neo-Tokyo Skylines” may well be among Cyanotic’s best instrumental tracks, leaving “Salvage the Excess” to close out Tech Noir with the band’s signature incorporation of searing drum & bass frenzy.

The album clocks in at less than 37 minutes, its brevity adding a sense of imperative, like the listener’s life may depend on surviving the onslaught of the album’s eight tracks. Aided by Relic’s Jordan Davis and longtime associate Drew Rosander, this ninth studio outing from Cyanotic proves to be among the group’s most concentrated and neatly constructed efforts. As previously stated, even without guitars, Tech Noir is as brutal and as abrasive as anything in the band’s past discography, still full of samples from action and sci-fi movies to keep the sound varied yet cohesive, planted firmly in the foundations of coldwave and industrial/rock while solidifying the band’s own identity.