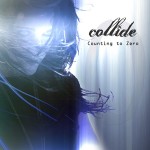 Collide
Category: Goth / Industrial
Album: Counting to Zero
Stars: 3.5
Blurb: The seventh album from the electro/goth rock duo may not be a stretch for them, but is full of the same rich production and performance we’ve come to expect and love.

There are those artists and bands whose sound is so distinguished and identifiable that you immediately know what to expect when a new album is released. In some cases, this is a detriment indicative of a lack of progress or exploration, while in others, it is simply the musical DNA that binds the whole of the artist’s output together to form a cohesive path of development and style. Collide is one such band. For nearly two decades, kaRIN and Statik have carved their own niche in underground music, incorporating gothic atmospheres and dark electronics with an ambient rock sound that is as much rooted in the contemporary sounds of today as in the bluesy, jazzy sounds of old. In so many ways, the band’s seventh album, Counting to Zero is a quintessential Collide album… but unlike many others, this works to their advantage.

As the shimmering guitars, somber electronics, and ethereal layers of vocals introduce us to the slow, epic opener of “Bending and Floating,” there is no doubt that it’s a Collide record. And then, “Lucky 13” comes in with a strutting rhythm and a subtle string refrain that sounds somewhere between a cabaret nightclub and an Arabian harem, scratchy guitars filling out the mix as kaRIN’s sultry voice soars in like a smoky jazz diva. Similarly, “In the Frequency” moves with a slow beat and a smooth bass line that evokes images of hazy city streets by night, while the sullen piano of “Human” and the title track provides a nice classical backdrop for the swirls of electrified ambience, the breathy vocals echoing into the ether while the drums apply just the right amount of power and restraint in equal doses. Especially noteworthy on this album, as exemplified best by “Mind Games,” is the use of vocoder on kaRIN’s voice, enhancing the atmosphere of the accompanying electronics while showcasing her precision of pitch. Once again, it’s nothing we haven’t heard from Collide before, but done so well on Counting to Zero that it sounds as lusciously fresh as ever. Other tracks like “Further from Anything” and “Clearer” amp up the rock energy, the balance of organic guitars and drums meshing well with the subtle but elaborate programming, each distorted sound working to augment rather than overtake each other.

Ever the model for self-sufficiency, Collide’s music is self-produced and self-released via their Noiseplus Music label. Their path is their own, and while many will listen to Counting to Zero feeling that it is no different from past works like Two-Headed Monster or Chasing the Ghost, it can honestly be said that no other band sounds like Collide. The diversity of their music appeals to a broad range of tastes, from the slower, jazzier numbers to the heavier electro/rockers. It may not be the most adventurous the band has been, but the richness of Statik’s production and kaRIN’s vocals shine throughout, making Counting to Zero at the very least another enjoyable entry in the Collide discography.