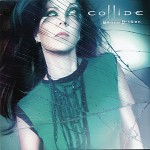 Collide
Category: Industrial / Electro / Goth
Album: Bent and Broken
Stars: 3.5
Blurb: For the fans and funded by the fans, this two disc offering of remixes and new material presents all the hallmarks of Collide’s lush and atmospheric brand of electro/industrial.

Ethereally melodic, atmospherically gothic, the duo of kaRIN and Statik – collectively known as Collide – has been enticing audiences into a lush and mystical world for over 20 years. The band’s style of ghostly industrial/electro music has drawn comparisons to the likes of Curve, combining guitar-driven aggression with synthesized ambience, topped off by kaRIN’s saccharine and spectral voice. It’s a distinguished and by now very familiar formula for Collide, one that has served the band well. With Bent and Broken, the band offers its fans a reward for their adulation; funded via Kickstarter and offering two discs worth of remixes from the albums Counting to Zero and Two Headed Monster along with a small helping of new material.

Skinny Puppy’s cEvin Key along with regular collaborator Ken “Hiwatt” Marshall offer a soothing and rhythmic rendition of “Mind Games,” starting the Bent disc off with just the right amount of magic to bring listeners back into Collide’s familiar musical wonderland. Tom Gipson’s Great Apes mix of “In the Frequency” recalls the song’s slow beat, replacing the smooth bass of the original with twilit sprinkles and swells of analog synths that evoke a more celestial vibe, while iNGRUD’s version of “Lost in the Frequent Sea” takes the song into more abstract territory of despondent layers of noise beats, creeping arpeggios and reverberating echoes that with the vocoders on kaRIN’s voice makes for a track that is as spacey as it is bluesy. The jazzy cabaret of “Lucky 13” is given a gritty and slithery makeover by Android Lust, while Shades of Red’s mixes of “Chaotic” with its almost militaristic beat and pseudo-orchestral emulations and “Clearer” with its sensual piano arpeggios and heavily percussive buildup make for a pair of nice additions. The alternating progression of sultry pianos to glitch-laden synths and guitars in Antigen5’s kaRIN’s Lullaby mix of “Counting to Zero” brings the first disc to a twitchily spacious close. The Broken disc features such gems as Chris Vrenna’s delightfully bouncy electro take on “In the Frequency,” DJO2’s equally danceable and infectious Pure Oxygen mix of the same song, along with his Oxidized mix of “Chaotic,” and a sharply electrified take on “Chaotic” by Synkraft, which brings in some mildly dubstep overtones and plenty of skittering synths to appease any fan of modern electro/industrial. Tapping the Vein’s Eric Fisher goes for a rocking vibe full of powerful drums, jazzy guitar interludes, and marvelously manipulated vocals on the Million Stars mix of “Counting to Zero,” while Whitney Kew’s mournfully melodic and acerbically ambient rendition of “Utopia” brings the album to a somber and beautiful conclusion.

With covers of Queen’s “She Makes Me” and The Glove’s “Orgy,” and original track “Bent and Broken,” the Collide sound is presented in all its glory across these two discs. Even amid the plethora of new ingredients on the part of the remixers, the constants of the band remain – Statik’s intricate and tight programming and kaRIN’s magnificent voice. While Bent and Broken may not be an essential release for Collide as it does little to deviate from the hallmarks of the band’s sound, it nonetheless provides the fans with more bang for their buck and delivers more of what they have come to know and love from Collide.