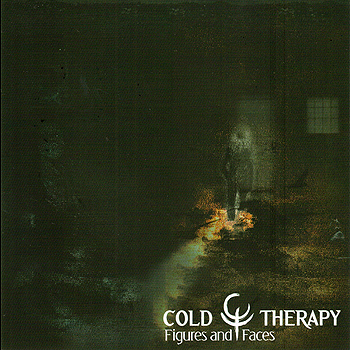 In 2012, Poland’s Jacek Wolański wanted to shift his focus from the aggrotech/EBM he created in his previous groups Unsinn and Traumatize to a dark electronic sound that would allow him to express himself and explore his personal tastes more deeply, and thus Cold Therapy was born. Cold Therapy’s third full-length album, Figures and Faces proves to be his darkest, most twisted effort to date. Packed with eerie melodies, dark soundscapes, and tormented lyrics, this album is sure to drag one through the depths of hell, but as a happily willing participant.

The first half of the album grinds along at a tense, slow pace. There are no raucous up-tempo beats to be found here, and this is by design. The entirety of the album creates a mood and tells a story and should be listened to all at once and in succession. The opening track, “The Pretender” starts with a friendly enough light synth riff, but then, the static and atmosphere builds into a hazy wall of pure darkness as Wolański’s growling vocals cut deep into the soul like a knife. “Figures and Faces” and “Scarecrows” follow suit complete with spooky church bells, twisted melodies, industrial clangs and clanks, cawing crows, and layers of haunted soundscapes that make one want to jump out of their skin.

A reprieve from the slow buildup toward madness occurs on the second half of the album where the songs pick up the pace ever so slightly. The themes and instrumentation continue from the first half, but the synths and beats expand and grow to give the songs a more mechanical electro/industrial vibe. The bells and crows make an encore appearance in “Shapeless,” but not in a repetitive way. “The Dark Red” stands out as a favorite on this album as the demented circus-from-hell melody makes one feel in the midst of a horror film about to be devoured by killer clowns and carnie freaks. The tune also reminds this ReViewer of that anxiety inducing, twisted little melody at the end of the third level in the Marble Madness videogame. At last, a mid-tempo drumbeat explodes behind the crazed melody and Wolański’s growl becomes more of a seething whisper/yell that ties the song together wonderfully. “Angesicht der Angst” stands out as the only instrumental track on the album and has a little Skinny Puppy flair to it. The mid-tempo beat and distorted synths underlying the lighter orchestral melodies stays on theme with the album and provides a nice transition to the last few tracks. The final tracks of the album feature three remixes, with Acervus’ remix of “Figures and Faces” pumping up the atmospheric fuzz and beat, while Impurfekt’s remix of “Scarecrow” lightens the dark mood of the entire album by adding beautiful pianos and brighter ambient sounds to the mix.

Jacek Wolanski set out to create pure dark electro with an old-school industrial vibe in his project Cold Therapy. His third album definitely succeeds in being the darkest he’s released yet through the tormented lyrics and wonderfully haunting melodies, definitely setting a somber and introspective mood, and one may have to be in that space to fully embrace and appreciate it. The music is extremely beautiful, yet weighs heavy… maybe a little too much so at points. However, this ReViewer absolutely loved the psycho circus horror vibe the album so brilliantly created.