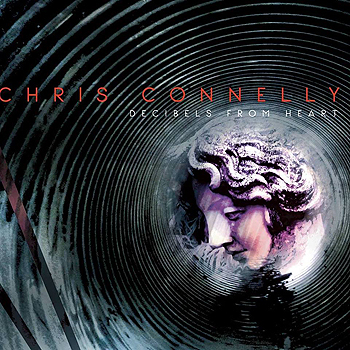 Chris Connelly
Category: Alternative / Rock
Album: Decibels from Heart
Stars: 4
Blurb: At times boisterous and loud, at other times more reserved, the latest solo outing from Chris Connelly is no quiet affair as it revels in heartfelt rock energy and thoughtful songwriting.

Already renowned for helping to shape modern industrial music as we know it as a member of MINISTRY and Revolting Cocks, Christopher J. Connelly has demonstrated in his numerous excursions a marvelous ability to thrive in any musical environment. The soulful croon he exhibits in much of his solo work has garnered more than a few comparisons to David Bowie, along with a singularly emotive songwriting style that has earned him a sizeable reputation in the annals of independent rock music, with Decibels from Heart being his latest outing under his own moniker. Taking a break from the heavy industrial of Cocksure for this album, Decibels from Heart finds Connelly still engaged in the collaborative spirit with a bevy of notable guest performers.

Ever the musical chameleon, every song on Decibels from Heart bursts with atmosphere and classic rock energy; yes, his voice most closely resembles Bowie, but his sense of harmony and melodious progression also brings to mind the likes of Elvis Costello, Roxy Music, and even The Beatles. This is most immediately evident in the opening track, “Mistreated & Wild,” with its shimmering guitar lines reminding this writer of ‘70s band Unicorn, the vocal interplay between Connelly and his Sons of the Silent Age band mate Claire Massey creating a lovely tapestry that carries the song from start to finish. The same can be said for other songs like “At Least When I’m Gone,” in which the floating harmony between Ruby’s Leslie Rankine and Connelly transitions perfectly into soaring sustained guitar melody, the title track with its lively rhythm and strident chorus melody, or “Workin’ Time” with its darkly urban atmosphere evoking images of drifting across rainy city streets, the falsetto in the chorus and washes of synth making it one of the album’s most poignant moments. Other notable tracks include “Be Mine When You’re Not Mine” with its xylophone loops and Connelly’s distorted voice, bringing to mind the likes of Iggy Pop’s version of “China Girl” or Peter Murphy’s “All Night Long,” while the funky and singing bass lines and noisy Adrian Belew-esque guitars of “Lavender City” help to elevate the otherwise brief song into one of the album’s best tracks. Adding a touch of jazzy noir flair is “Let’s be Actors” with Rebecca Pidgeon’s sultry voice playing well with the slow pace and eerie organs reminiscent of Angelo Badalamenti’s scores for David Lynch, as is also the case with the galloping beats and saxophone flourishes of “Cinema Thing,” though the ghostly vocals of Roxy Swain amid the Latin rhythms and ambient washes of guitar and synth in “To Swing from the Air” make for a brightly pleasant experience almost akin to shoegaze.

Decibels from Heart may not be too much of a creative stretch for Chris Connelly as much as it is simply the culmination of one facet of his personality. At times boisterous, other times reserved, the album is undeniably the work of a man who enjoys what he does and takes no issue with the effects his influences have had on him; comparisons to those influences aside, Connelly’s own songwriting voice shines through with each note he plays, with the help of band mates like Matt Walker (Filter, Garbage, Smashing Pumpkins), Scott Bennett (Brian Wilson), and Mike Farrell (Morrissey). Decibels from Heart is true to its title; a heartfelt display of loud rock energy and thoughtful songwriting from one of modern music’s true artists.