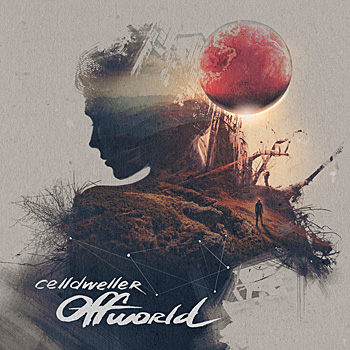 Since adopting the Celldweller moniker in 2000, Klayton has developed a singularly expansive style that incorporates the best elements of alternative rock and metal with virtually all forms of electronic music, topped off by a lyrical focus that has increasingly gazed towards the infinite wonder of the cosmos. Setting a celestial course away from the mystical adventure of Wish Upon a Blackstar and the dystopian cyberpunk of End of an Empire, Celldweller explores more emotional and introspective themes amid the infinite vastness of the heavens on this fourth album, Offworld. Though Klayton is no stranger to ambient textures and slower tempos, such motifs have been used to enhance the more energetic fervor that many identify with Celldweller, making Offworld a notable departure from the project’s usual stylistic trajectory… but one that yields some undeniably exceptional results more in line with the vignettes of the Soundtrack for the Voices in My Head series or the more instrumentally focused Transmissions series (now under the moniker of FreqGen).

Nebulous clouds of reverberating pianos, psychedelic swirls of guitar, and rhythmic electronic pulses introduce us set the stage with the opening title track, the familiar howls of a recognizable melody that will become more distinct in the later reprise providing assurance to listeners that this is indeed the Celldweller they know. Throughout Offworld, Klayton acts as a sort of interstellar minstrel as crystalline acoustic and electric guitars resonate throughout each track, his emotive and harmonious voice guiding us through the sonic æther. For instance, “How Little I Must Know” revels in its spacious approach with guitar drenched in reverb as Klayton sings with the curious anticipation of a scientist impatient to behold the wonders of deep space, echoed by the equally minimalist a cappella of harmonized vocoded layers on “Mother’s Arms.” The shimmering acoustic guitars and intricate synthesizer solos of “The Great Divide” could rival Michael Oldfield with their progressive complexity, the lyrics lamenting and cautionary, while the appropriately titled “Echoes” glistens with all the brilliance of a galactic center as Klayton’s soaring voice is complemented by the twinkles of gothic guitar strums and distorted feedback, making for a lush and dreamy shoegazer track. The album’s penultimate track, “Last Night on Earth” beautifully encompasses the epic scope of Offworld and indeed Celldweller’s music as a whole, full of orchestral aplomb as majestic harmonies interplay with powerful beats and bursts of guitar and synth.

As stated, Offworld gives listeners the anchor of familiarity as the reprise of the title track further emphasizes that melody that Celldweller fans have heard in more than several iterations already – “Own Little World.” Still as anthemic as ever, the track retains and strengthens its inviting character, serving as a thematically satisfying allegory for the pleasures of infinite discovery and perpetual awe. Never one to keep his different musical personalities too far removed from each other, Offworld also references Scandroid with a slower and somber version of “Awakening With You,” which contrasts sharply from its bouncier new wave variant, while “Into the Fall” bridges together elements of the instrumental “Malacandra” with the choruses of “Embracing Entropy,” both from the latest Circle of Dust album and making for one of the album’s more deliciously haunting moments. And then there is the cover of The Call’s “Too Many Tears,” which takes the rhythmic and vocal intensity of the original firmly into Celldweller’s distinguishably hybridized electro/rock style quite effectively, while a special bonus on CD and digital editions of the album comes in the form of a remix of “Awakening With You” by ambient electronic artist and Tangerine Dream member Ulrich Schnauss.

Standing in stark contrast to the vigorous drum & bass rocker that was the “Electric Eye” single released earlier this year, Offworld is not as uncharacteristic of Celldweller as it might come across, but simply offers an alternative focus that stays true to the project’s creative and exploratory goals. It can be said that some of those more accustomed to the high impact stylistic mélange that has been Celldweller’s output up to now may find Offworld to be a far more sedated and perhaps too mellow an experience by comparison. However, anybody familiar with Klayton’s immersive sci-fi inspired lyrics and ethereal sonic environments should be taken in by the album’s audio effervescence that is so indicative of the man’s versatility and prowess. Prepare for life beyond the skies, for a new life awaits you Offworld.