Celldweller – Live Upon a Blackstar0 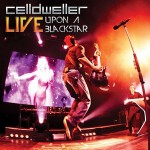 Celldweller
Category: Industrial / Electro / Dubstep
Album: Live Upon a Blackstar
Stars: 3.5
Blurb: Offering only the audio component to one of the most sensory and exceptional live shows to emerge in years, this live album still offers up a plethora of engaging sounds.

Klayton is among the most singular musical entities to emerge in the last two decades, constantly honing his craft and refining his songwriting and production abilities while still maintaining a prolific pace that would drive most other bands and artists to total exhaustion. Hitting the road for the first time in five years in 2011 with his Blue Stahli cohort Bret, the Celldweller live experience eschewed the conventions employed by most bands of recreating the studio recordings with occasional improvisations to emphasize a sense of spontaneity. No, what Celldweller offered was a complete redefining of what a live concert could be by presenting a multimedia extravaganza that featured video backdrops and totally remixed versions of the songs, streaming together with the seamless continuity of a DJ set to make for a unique experience. While several of these alternate versions have been released in their studio counterparts, Live Upon a Blackstar gives listeners the Celldweller live show in the comfort of their headphones.

With “Through the Gates” beginning the proceedings with an appropriate buildup of epic orchestral flourishes and squelching electronic textures, “The Best It’s Gonna Get vs. Tainted” starts the show off with a bang, immediately pumping the audience up and initiating a surefire dance floor frenzy. Klayton’s live vocals are as crisp and on point as in the studio, and while there is a copious amount of electronic manipulation and accompaniment, be it through vocoders or automatic tuning and backing tracks, he infuses enough variety to make it sound full and organic. The segues from track to track are expertly executed, again instilling the sensation of a DJ mix, as the melodic and speedy chaos of “Own Little World” deteriorates into the pulsating atmosphere of “Symbiont,” the latter transforming one of Celldweller’s best known and most aggressive tracks into a lush ballad. Similarly, “Fadeaway” is given a pulsating electro makeover in contrast to its original alternative/industrial rock version, the vocals harmonized and reverberating into a resonant ambience that meshes perfectly with the danceable beats and synth sequences, eventually transforming into a blistering display of scathing dubstep. “So Long Sentiment” and “Eon” are combined into an all out drum & bass assault, and “Switchback” appears in its umpteenth variation, starting off ominous and atmospheric and then switching to full throttle force of scraping guitars and scorching electronics. Perhaps the finest moment in the show, oddly enough, is the one song presented in a form that most closely resembles its studio counterpart, “The Lucky One.” As a song that was recorded with participation from fans around the world, it is only fitting that this song be the one most unchanged from its original version; as well, while the rest of the album seems to emphasize the recordings from the Detroit performance, this song clearly incorporates segments from Tokyo, New York, and Los Angeles, giving the audience the most credit possible on a live recording.

Unfortunately, where Live Upon a Blackstar falls short is that it can only feature the audio element of what is truly a feast for all of the senses. While a DVD version is currently in production, the album alone simply can’t convey the visual component of Klayton and Bret trading off on guitars, keyboards, and even live drums, performing with the video accompaniment as dynamically as they would with any live musician. “Ursa Minor” is a pleasant instrumental interlude, of which there were several in the actual show, during which the duo would play to a backdrop of film samples manipulated into tracks as electrifying as the rest of the set. Given the issue of copyrighting, it’s no surprise more of these segments were not included and their absence does little to hinder the listening experience; rather, it makes the album all the more an extended teaser to encourage fans to physically attend the concert at the next given opportunity and remind those who were present what they were able to hear. Here’s hoping Klayton won’t wait another five years to tour again and may yet find new ways to evolve the standards of a live concert.