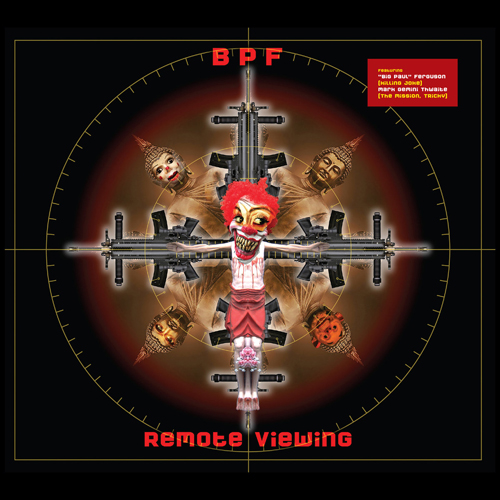 BPF
Category: Industrial / Rock / Post-Punk
Album: Remote Viewing
Blurb: A potent blend of industrialized rock and eclectic post-punk stylings driven by one of the mightiest drummers of his generation in his solo debut.

After his departure from Killing Joke in 1987 and until his return in 2008, the band never seemed to find a more permanent replacement… and with good reason. True to his moniker, “Big Paul” Ferguson’s drumming is an inimitable and fundamental component to the Killing Joke sound, one that simply could not be adequately replicated even by the likes of equally proficient and powerful drummers like Martin Atkins, Geoff Dugmore, Ted Parsons, or even Dave Grohl. His is a sound that in true godlike fashion summons thunder from the skies and makes the ground quake as throngs of fans unleash wild abandon in mosh pits and dance floors, and with Remote Viewing, his solo debut under the name of BPF, he gets to showcase his own songwriting talents in bombastic style.

With longtime associate and collaborator Mark Gemini Thwaite lending his production, mixing, and instrumental skills, along with mastering by Brainshadow, Remote Viewing presents seven tracks of unbridled sonic fury. It is almost an exercise in contrasts and contradictions, for while Ferguson’s drumming is as forceful and as varied as one would expect, his vocal performance is on the opposite end of the spectrum, delivered in a soft-spoken manner that belies the acerbic sociopolitical bite of the lyrics. For example, the steady march of “Fear (The Great Motivator)” burns with an almost orchestral ferocity as Thwaite’s layers of synths and howls of guitar build a wall of noise upon which Ferguson sternly addresses the extent to which humanity allows itself to be ruled by fear, the repeated chant of “Fear does not exist” leading the track to a defiant climax. “Hungry Ghosts” begins the album in earnest as layers of dynamic drumming and growling guitar coalesce into an expansive sonic wasteland, as if to introduce the listener to the aftermath of an apocalypse. There is the almost psychedelic ambience of “Terrible Warriors,” the steely echoes of light bass, twinkling synths, and tribal hand drumming making for one of the album’s more quietly tense moments. As well, songs like “Reboot” with its danceable grooves and rather catchy phrases, along with the industrialized thrust of Thwaite’s guttural riffs in “I Am War” also stand as memorable tracks, Ferguson’s ability to infuse subtle melodies in with the acid tongue monotone of his voice adding an almost despondent flavor suitable to the record’s themes. The same can be said of “XBOX,” in which he decries the excess of materialism, religious dogma, and objectivism in modern society, complete with some of the album’s most memorable lyrical passages like “Ayn Rand was an evil bitch with a bad idea,” “Laissez-faire just isn’t fair,” and “you were too busy on your useless XBOX infotainment motherfucking waste of time machine.” All the while, Thwaite’s noisy instrumental backdrops blend chugging industrial/rock riffs with seething electronic screams not unlike those heard in the most transcendental dub records. Oh, and speaking of dub, Remote Viewing ends with “Zarzal,” whose slow beats, chilled out synths, and icy guitar arpeggios topped off by Ferguson’s pensive, yet emotive melodies all make for a welcome respite to bring the album to a satisfying conclusion.

There can be no doubt that “Big Paul” Ferguson is one of the mightiest drummers of his generation and beyond, and that is certainly on display on Remote Viewing. But more than that, this first solo effort is a testament to his skills as a musician, demonstrating just how indispensable he is to his revered band and presented with a kind of vitality that most younger artists struggle with. His expression of social discontent is as potent as any in industrial or underground alternative music. Furthermore, as if one could call Mark Gemini Thwaite’s musical abilities into question, the interplay of varying rock and electronic styles coupled with Ferguson’s rhythms and words makes for a piquant brew. Despite the album’s short length of just under a half hour, Remote Viewing is essential listening for troubled times.