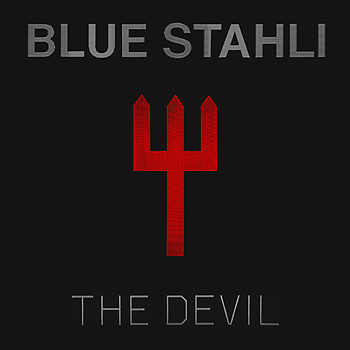 It has been four years since his self-titled debut, but Blue Stahli has not been languishing by wayside during that time; as one of FiXT’s most prominent artists and remixers, Blue Stahli’s Bret Autrey has demonstrated a propensity for genre-bending with a sleek production style that few can match. While initially seen as Celldweller’s live band mate and collaborator, The Devil showcases Blue Stahli coming into his own musically and production-wise with his sights focused primarily on an electrified blend of alt. rock melody, heavy metal riffs, and frantic electronic. One need only hear a song like “Down in Flames” with its hooky guitars and emotive vocals, layered harmoniously in anthemic fashion to make for one of the album’s instant classics, worthy of mainstream consumption without sacrificing its edginess. Indeed, this sense of accessibility extends to virtually every song on The Devil, for even in the blistering speed metal runs of “Not Over Til We Say So,” there is an assortment of disparate elements that transcend simple categorization. Most notably, the vocal harmonies between Autrey and Emma Anzai elevate the song through a remarkably satisfying chorus, as does the steely groove of bass and hip-hop samples topped off by glitch-laden electronics. “Enemy” is particularly striking with the chugging quiet of the verses contrasting quite fluidly with the bombast of the chorus, waves of rubbery pads and noisy guitars, while the scratchy synths and heavy beats of “The Fall” provide more than adequate backing for one of the album’s most heartrending chorus melodies. Speeding things up in a manner that recalls some of the faster moments of his previous album is “You’ll Get What’s Coming,” but it is the guest performance of Stavesacre’s Mark Salomon – a past collaborator of Klayton’s during the Argyle Park and AP2 albums – that steals the show, his rap-like delivery full of all the bite and attitude that has made his voice a singular sound in underground music. “Rockstar” struts with all of the cocksure bluster appropriate to its subject matter, while the title track plays upon its malevolent connotations with a dissonant riff that is almost bluesy in its ambience. This bluesy feel continues to “Demon,” a strident and simple guitar riff playing atop a steadily danceable and driving rhythm that brings the likes of Depeche Mode’s “Behind the Wheel” or “Personal Jesus” to mind. Throughout The Devil, Blue Stahli infuses his own manic production stylings, full of electronic flourishes that maintain the aggressive rock & roll tone without being overridden by flights of EDM fancy; a quality that immediately and quite effectively sets it apart from his past work. With The Devil, Blue Stahli has stepped out of the shadow of his mentor; while comparisons to Celldweller could be found in abundance on the debut, they are virtually brushed aside on this album as Blue Stahli solidifies his own distinctive electro/rock voice.