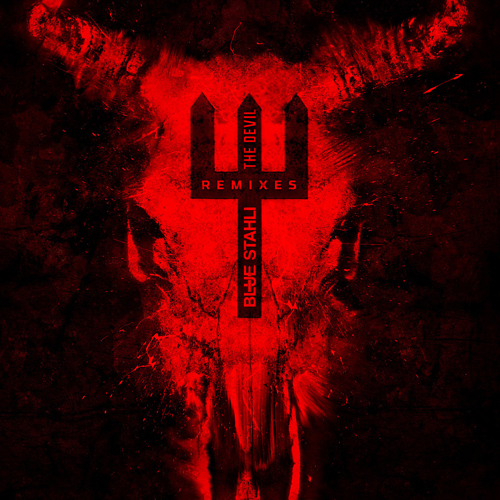 Blue Stahli
Category: Electro / Rock
Album: The Devil (Remixes)
Blurb: With only a few missteps, this companion to Blue Stahli’s sophomore album provides a fine collection of remixes that emphasize the creative versatility and stylistic diversity of the project.

The Devil was the sophomore album from Blue Stahli, the electro/rock project of Bret Autrey. Presenting a sharper and more refined songwriting and production aesthetic on this album, the artist had established a stronger and more singular musical identity to emerge from the shadow of his collaboration with Celldweller. After three years, Blue Stahli hits us with a collection of remixes that further showcase the mélange of musical styles he incorporates, while promising a few surprises along the way.

There is often a misconception that remix albums simply regurgitate the songs in a more dance-friendly configuration, taking the vocal melodies and perhaps some of the instrumental components set to a more energetic beat; such is not the case with The Devil (Remixes), for even those versions that are designed for the dance floor take more than a few liberties to transform Blue Stahli’s original tracks into something else entirely. For instance, tracks like the ANX remix of “The Devil” with its chaotic arrangements and vocal distortions, turning the refrain of “I’m the devil” into a vocal hook that works in tandem with the forceful beats, or the glitch-laden mania of JaySounds’ remix of “Rockstar” take what were straightforward electro/rock tracks into a more EDM inspired territory. The same can be said of the Wildpuppet remix of “Enemy,” its bouncier up-tempo rhythms and scathing stop/start hits of dancehall synths and strident beats suit the track’s emotive chorus, while the Gydra version of the song makes more effective use of the song’s bass groove, the shrill electronic warbles and seething drum & bass breaks clashing violently with the guitars. On the other hand, the Thomas Vent remix of “Shoot Em Up” emphasizes the clean guitar lines with a trippy Brit-hop beat set to a sharper tempo with some electronic spasms and melodic pop hooks that Michael Jackson would’ve been proud of, while both the Indo remix of “Demon” and the Owl Vision remix of “Ready Aim Fire” take on a slower, more ambient character as distant vocal reverberations and punchy synth and bass effects make for some rather awesome dark dub tracks. Rabbit Junk’s take on “Not Over Wil We Say So” makes for a great opener as its placement of the thrashing guitars with the furious synths and even more insistent beats keeps the energy level set to maximum even amid the striking vocal harmonies, and although Mark Salomon’s aggressive, almost hip-hop style vocals remain the star of “You’ll Get What’s Coming,” Sebastian Komor infuses a bit of creepy sustained pads to make for one of the album’s best moments.

At worst, some of the remixes on this album, like the Entropy Zero version of “Armageddon” and Rave the Reqviem’s take on “Down in Flames,” offer too little to standout in comparison to the originals. Even Animattronic’s Chiptune recreation of “Ready Aim Fire,” as amusing as it is, feels tacked on to fill out the album’s runtime. However, these moments are few and far between on a remix collection that makes The Devil (Remixes) a fine entry in Blue Stahli’s discography, and one that should tide audiences over until the next Blue Stahli release of new material.