Bloody Knives – I Will Cut Your Heart Out for This0 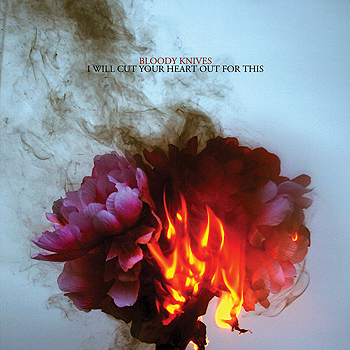 Bloody Knives
Category: Noise / Rock / Post-Punk
Album: I Will Cut Your Heart Out for This
Stars: 3.5
Blurb: Those with sensitive ears may have difficulty wading through the sonic miasma, but they would be rewarded with some highly melodic, driving songs.

Over the course of several albums and EPs, Preston Maddox has guided his band Bloody Knives through many stylistic paths; with a post-punk songwriting sensibility driven by off-kilter chord changes and guitar heavy atmospheres, topped off by sonic textures that run the gamut from distorted shoegaze to ambient noise. With I Will Cut Your Heart Out for This, Maddox ups the creative ante by augmenting his already keen songwriting with a stronger production sound.

Kicking into high gear with the screeching howls of “Cystic,” a discordant but rolling bass line underscoring Maddox’s vocals reverberating with a ghostly quality that matches the howl of guitar noise, the album is off to a most disquieting start. Throughout I Will Cut Your Heart Out for This is a tonal disparity between inviting melodies and oppressive noise, not unlike the dreamy noise/rock predilections of My Bloody Valentine, but taken to a decibel-shattering extreme usually more akin to the likes of Merzbow. And yet, buried within the screeches of feedback and the voluminous clouds of distortion are songs, led by Maddox’s gritty, driving bass lines and airy vocals. Tracks like “Reflection Lies,” “Poison Halo,” “Static,” and “Buried Alive” with their urgent drumbeats, swelling, almost choral synth pads, and resonant, shimmering guitars could easily be radio ready, catchy post-punk rock songs when stripped of their overdriven reverb-drenched layers, Maddox’s melodies sparse yet emotive. “Black Hole” is perhaps the crown jewel of the album, beginning with a celestial keyboard intro that evokes the vast, cold expanse of deep space, the power and immediacy of the drums, bass, and guitar lines hurling the listener right to the event horizon, swirling further toward the unrelenting center of sonic gravity that simply will not relinquish its grip.

Aided by drummer Jake McCown and recording engineer Ian Rundell, Maddox crafts an icy sound that is dense in its venomous and hazy ambience as it is in its lyrical and melodic poignancy. Those with sensitive ears may find the excess of feedback and noise to be overpowering, which can run the risk of diminishing the overall appeal and prevent many from discovering the depth of the music; they would truly be missing out. There is music to be heard past the sonic miasma, and those with more attentive and discerning ears will be rewarded with each track of I Will Cut Your Heart Out for This, which may stand as Bloody Knives’ most accomplished release yet.