Black Tape for a Blue Girl – These Fleeting Moments0 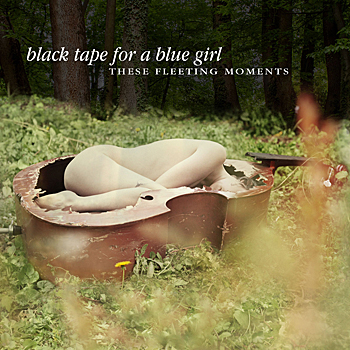 Black Tape for a Blue Girl
Category: Ambient / Classical / Darkwave
Album: These Fleeting Moments
Stars: 3.5
Blurb: Creating an ethereal sound for melancholic moments; all that Black Tape has excelled at.

Black Tape for a Blue Girl has been one of the most popular entities in the world of darkwave music, with These Fleeting Moments marking the act’s twelfth album. Consisting of the group’s usual brand of classical and ambient crossover, the new album features the Black Tape sound in fine form.

While many goth and darkwave acts rely greatly on exuberant vocabulary and lengthy paragraphs to achieve some semblance of lyrical depth in describing simple feelings, Black Tape for a Blue Girl gets right to the point with only the occasional metaphor. It is not hard to understand what these lyrics mean the first time, even as it slowly becomes clearer with each listen that there’s something more between the lines. More than just songs about love, death, life, and hate, tracks like “The Vastness of Life” and “Desert Rat-Kangaroo” try to create a new perception of reality, make the listeners reevaluate the bases that life has settled for them and if it is possible to consider an extreme makeover. The most explicit on this may be “Meditation on the Skeleton,” which really made me get into a different state of consciousness.

However, the minimalistic sound and length in some tracks may become an issue for some, as many sections of white noise or blank spaces are found between the five parts of “The Vastness of Life” or the ending of almost all of the songs. It could have been on purpose, as I don’t think someone like Sam Rosenthal, who has been in the industry for many years, makes mistakes of this sort, but it doesn’t give the best aesthetic impression. The very few instrumental tracks have a more contemporary sound with more of a rock influence that reminds a little too much of a non-electronic The Birthday Massacre. The three of them represent a new face of the band – perhaps more commercial, but also with a singular attractive ideal for newcomers. It is a shame that we have a little, quick vocal section at the end of “She Ran So Far Away that She No Longer Can be Found,” breaking all of the enchantment.

For anyone who doesn’t really know if Black Tape for a Blue Girl could be their kind of music, there is a free album on the group’s Bandcamp that could serve as an introduction and clarify some doubts on Black Tape’s general style; although, I strongly encourage you to give These Fleeting Moments a try and discover a new style that you might like, as it happened with me.