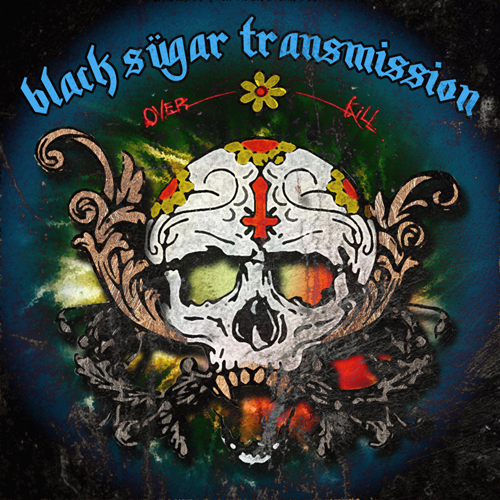 For more than a decade, Andee Blacksugar has been cultivating his own peculiar hybrid of electro/industrial rock & roll, with his 2016 release of In the City’s Arms presenting some of his most accomplished material yet. For his latest record as Black Sugar Transmission, Blacksugar pays homage to the legendary thrash/metal band Motörhead with a full cover of the 1979 sophomore album Overkill. Recorded in five days, Blacksugar transforms the guttural vitriol of the original into a blend of electrified glitch-laden programming and dynamic guitars, making for a sound that heavy metal purists may balk at but that loyal fans will find to be a worthwhile experiment.

One of Motörhead’s most revered songs, “Overkill” starts the proceedings with punchy drumbeats and scratchy electronics that merge with raging guitars to create an immediately recognizable thrashing effect. The fluidly angular guitar solos are particularly striking, demonstrating Blacksugar’s instrumental prowess, along with his juxtaposition of complex effects proving his technical chops. Songs like “(I Won’t) Pay Your Price” with its whiplash strut and intricate guitar flourishes, the familiar galloping beat and swaggering solos and melodies of “Capricorn,” and the brute force of “Damage Case” all follow a similar path of presenting rather faithful recreations that don’t skimp on Black Sugar Transmission’s own sound. The same can be said of “Metropolis,” Blacksugar even applying a similar vocal harmonization and sticking to the original’s dark rock & roll bluster, albeit taking a few liberties with the beat progression and adding more dynamic affectations in the guitar solos. Other tracks take a more daring approach, with “Stay Clean” slowing things to infuse the song with more of a sleazy funk vibe, while “Tear Ya Down” with its glitchy electronics and falsetto harmonies would be perfect for lounge lizards playing video games, the original’s iconic ascending riff only appearing in the middle. Finally, “Limb from Limb” closes things out as Blacksugar strips the song down to a rootsy bluesy mix of acoustic guitars and subtly layered synths.

As stated, some may not appreciate Blacksugar’s efforts as he infuses his own modern production sensibilities, which for some may diminish the raw power of the original. He may not vocally possess the bark to match Lemmy Kilmister’s venomous bite, and his guitar histrionics may seem excessive against the rocking simplicity of “Fast” Eddie Clarke’s solos, although Blacksugar does well to stick to the essentials of his riffs, which are presented in fine form. Similarly, the tightly programmed beats and synths stick rather well to the rhythmic knitting of Kilmister’s bass and Phil “Philthy Animal” Taylor’s drumming. All in all, Black Sugar Transmission follows the basics of what made Motörhead’s music so timeless. As tribute albums go, it can be said that Overkill is a successful and reverent effort to honor one of the greatest heavy metal bands ever.