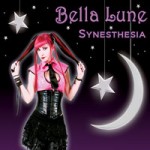 The sophomore album is never an easy task, especially for a band that has experienced a great deal of good fortune in a short amount of time since the debut. Founded in 2005, goth/electro act Bella Lune has been a rising star in the scene since the release of the Abstracted Visions album in 2007, performing alongside such heavy-hitters as Voltaire, My Life with the Thrill Kill Kult, Julien-K, I:Scintilla, and even crossing the seas to perform in Japan and be featured in numerous compilations. With Synesthesia, Fuchsia and Kal3id take their appealingly dark flights of fancy further with twilit melodies and starry ambience.

“Denial” sets the stage for the album as twinkling synths and restrained dance beats underscore a somber violin melody while Fuchsia’s vocals hover ghostlike in the mix, making for a lovely and ethereal opener. Throughout the album, Bella Lune displays a penchant for combining various influences into a lovely mélange that is at once reminiscent of the new wave of the ‘80s and the goth rock of the ‘90s. Songs like “Ophelia,” “Illogical Logic,” and “Spiral Effect” recall the dark electro-pop of early Depeche Mode, while the rickety bass and shimmering guitars that resonate throughout, especially on songs like “A Different Effect,” “Unanswered Questions,” and “Last Words” will surely remind many listeners of The Cure. The cloudy atmospheres of reverberating guitars and synthesizers on “The Finite One” will doubtlessly appeal to fans of the more mystical modes of Faith and the Muse, while “The Dolly Pop Song” possesses an almost whimsically erotic quality offset by Fuchsia’s vocals, which sound at times remarkably similar to Cranes’ Allison Shaw.

There is very little negative to say about Bella Lune’s Synesthesia – the production is effective, the songs catchy and melodic. At the same time, there is also not much that distinguishes Bella Lune from most other goth/electro groups, and while this certainly helps the band gain favor alongside the likes of The Birthday Massacre or The Crüxshadows, it will be nice to hear how Fuchsia and Kal3id develop their sound in the future to become a standout act in the genre. Regardless, Synesthesia is an album that hits more than it misses and is worth more than a few listens.