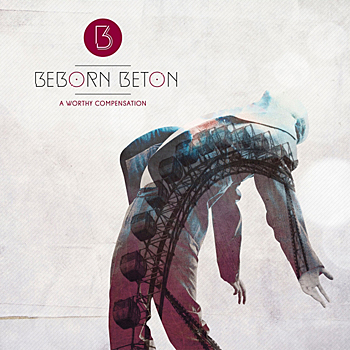 Beborn Beton
Category: Synthpop / Electro
Album: A Worthy Compensation
Stars: 4
Blurb: Returning after all this time, Beborn Beton presents an album that is sure to remind you how much you’ve missed them.

It’s hard to believe Beborn Beton has been silent for 15 years. Though there was a remix album and compilation album in that time, A Worthy Compensation is the German synthpop trio’s first album of new material since 1999’s Fake. Showing no signs of rust from the long period of inactivity, Beborn Beton instead sounds reinvigorated by its hibernation, showing a keen grasp of contemporary sound engineering and moving well beyond simple synth hooks of days past.

While “Daisy Cutter” starts off on shaky ground, sounding like a pale imitation of Beborn Beton’s sound with Stefan Netschio’s voice even sounding a bit strained, the track does slowly build momentum and is lifted from the doldrums by a strong chorus, though it still may leave the listener a bit worried for what the rest of the album holds. Thankfully, those fears are quickly squashed by “I Believe” with its intoxicating sound and bewitching vocal work. “Anorexic World” and “Was Immer” interestingly sound very much like classic Beborn Beton tracks, but a crisper mix and richer sound work bring them into the current decade. “Last Day On Earth” is an exceptionally emotional and moving track that is one of biggest highlights of the album. Another highlight, “She Cried” touches on some interesting subject matter as it explores the thrill of being a performer and the high of fan reactions. “Terribly Wrong” is a bit of an odd misstep as the track works well, but features some generally unneeded and mildly out of place samples from The Matrix, though amusingly, this is the band’s first opportunity to sample the film.

A Worthy Compensation is not only a worthy addition to the Beborn Beton discography; it is easily among the band’s best works to date. The album is contemporary and fresh, but still contains all the magic that has made Beborn Beton great. There are a few weak tracks, but the incredibly emotional and expressive work found on the album more than makes up for the few missteps. Beborn Beton has harnessed some impressive new sound work and coupled it with a history of strong hooks and excellent vocal work to produce something that is sure to excite old fans old and make new ones.