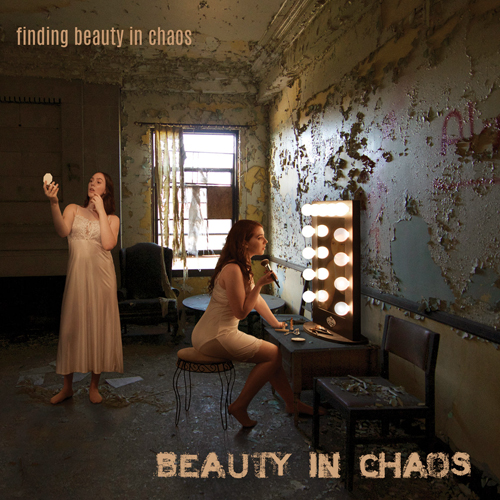 Michael Ciravolo is used to being a sideman in a band. He has been a guitarist for Human Drama and Michael Aston’s Gene Loves Jezebel for decades, but now, the spotlight is on him. Along with producer Michael Rozon, Ciravolo has assembled an amazing cast of musicians for a project dubbed Beauty in Chaos, resulting in an album, Finding Beauty in Chaos, that is an amalgam of styles that harmonize incredibly well together. To look at it on paper, that might seem impossible; how can you put Al Jourgensen, Ice-T, and Robin Zander on the same album and make that work? You have to have a mind like Ciravolo’s. He has penned 14 tracks that really defy easy classification. Based on his roots, you’d easily lean toward gothic, but that’s pigeonholing. Taken as a whole, it’s an all-over experience; you are not just listening to ‘blah blah’s’ new album. This is an album to be felt on multiple levels. So many different things will be heard, and upon repeated listens, you’ll likely hear things not picked up on the previous times.

You may have read other reviews or articles about this project, but in case you haven’t, it really is worth revealing again the amazing cast that make up the supporting musicians for Ciravolo’s Beauty in Chaos. They include Ashton Nyte (The Awakening), Wayne Hussey (The Mission), Simon Gallup (The Cure), Robin Zander (Cheap Trick), Al Jourgensen (MINISTRY), Pete Parada (The Offspring), dUg Pinnick (Kings X), ICE-T (Body Count), Michael Aston (Gene Loves Jezebel), Michael Anthony (ex-Van Halen), Dirk Doucette (Gene Loves Jezebel), Pando (A Flock of Seagulls), Evi Vine (Evi Vine), Betsy Martin (Caterwaul, Purr Machine), Marc Danzeisen (The Riverdogs), Kevin Kipnis (Purr Machine, Kommunity FK), Rudy Matchinga (Red Scare), Johnny Indovina (Human Drama), and Tish Ciravolo (Stun Gun). Each musician brings his or her own uniqueness to the table, but in the hands of Ciravolo and Rozon, they all become a well oiled machine that delivers amazing songs.

Opening the album is Michael Aston of Gene Loves Jezebel with the track “Road to Rosario,” a track that deserves to shine; songs that are mournful but have a hook and stay in your head are always worthy of note. One can feel the passion in Aston’s voice, and it’s moving both lyrically as well as in its delivery. On top of that, musically, it rocks. Ashton Nyte of The Awakening had the honor of having the lead single, “Storm,” as well as being featured on the title track and one of the other standouts, “Bloodless and Fragile,” which sounds exactly as the title suggests. The moodiness of the underlying bass and guitar textures are accentuated by an electronic sitar that plays around Ashton’s baritone for a brilliant contrast. “The sky will shake / the dark will fall / and we’ll be going home” is sung toward the end in layers of Nyte’s voice, which is made to sound like an unholy chorus of angels announcing the apocalypse… truly chilling to hear.

Main Mission-man Wayne Hussey (and The Cure’s Simon Gallup) contributes his signature voice to the second single, “Man of Faith,” plus “The Long Goodbye,” marking the first time that these two have collaborated; although, they make it seem like they’ve worked together for years. Both tracks are standouts, and audiences should keep a sharp eye out for the upcoming video for “Man of Faith.” I know that there are no keyboards on this album, but “The Long Goodbye” and the Johnny Indovina track, “Memory of Love” have what sounds curiously like a Mellotron. However, we have Mr. Ciravolo’s assurance that there are no keys present! Nonetheless, it’s a brilliant texture added to these tracks, lending to the darker side of the album. On the brighter and more rocking side, we have tracks like “Look Up,” featuring Ciravolo’s wife Tish on main vocal duty for a wistful, harder edged shoegaze song à la My Bloody Valentine. The cover of T. Rex’s “20th Century Boy” with Al Jourgensen absolutely shreds, while “Drifting Away” with Robin Zander on vocal duty (and ex-Van Halen bassist Michael Anthony harmonizing) makes one feel nostalgic for a good stadium rock show with its sing-along style. “I Will Follow You” is a gorgeous acoustic based track worthy of a single as Evi Vine’s hushed vocal is somewhat reminiscent of Rose McDowall from Sorrow.

Featuring so many standout tracks, Finding Beauty in Chaos will surely find fans no matter what genre of music you listen to. The wide appeal should help this album get airplay all over the world and shine a light on someone deserving of their moment in the spotlight. Ciravolo (along with Rozon) has really pulled off an amazing feat with this album.