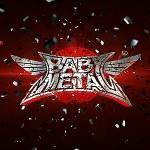 Babymetal
Category: Metal
Album: Babymetal
Stars: 3
Blurb: An album that people will either hate that they love, or love that they hate.

A social media sensation that briefly drove its album to the top of the iTunes Charts, Babymetal is the Japanese unholy union of heavy metal and idol style J-pop. Fronted by three cute teenaged girls who offer their sugary vocal style as grinding guitars and blastbeats back them, the act produces a very strange but hard to resist combination. Put together by the Amuse talent agency, the three idol singers “graduated” from the Sakura Gakuin, a manufactured idol super group that routinely cycles its members. Seeing more could be done with these three girls, they were brought together to front a heavy metal group, a genre the girls reportedly were initially unfamiliar with. Branding themselves as the new genre of kawaii-metal (kawaii is Japanese for cute), this unlikely combo has quickly become an international phenomenon.

From the very dramatic introduction track, it’s hard to differentiate Babymetal’s debut from most death metal albums at first with the gravely male barking vocals so common to the genre and only occasional vocal flourishes from the three female leads. It is with “Megitsune” that the Babymetal style becomes more obvious as metal and sugary J-pop meet head on, taking the generic electronics prevalent in J-pop and infusing it with heavy guitar, but it sadly only really highlights the clichés from both genres as this easily forgettable outing feels more like a splicing of familiar songs. However, with “Give Me Choco!,” the mixture becomes a bit more insidious as a much more predominantly metal style with the incredibly cute vocals of the female leads shows how bizarre and strangely wonderful the combination can be. The frenetic and manic style of the album at times seems to be a bit too random for its own good as it ventures into even more genres and styles. “Onedari Daisakusen” seems to be ripped straight from a Limp Bizkit album with the girls doing their best Fred Durst impersonation. Along with the experimenting with rap and nü-metal, “Uki Uki ★ Midnight” even throws in dubstep as it suddenly jumps between hard metal, generic J-pop, and dubstep without fluid transitions. When it does hit these speed bumps, even at its most laughable, there is still an undeniable charm that makes it difficult to not forgive Babymetal for such mistakes. Even the attempts at Durst-ian machismo come across more cute than obnoxious.

Babymetal’s debut full-length album is certainly a strange beast. The album is clearly manufactured and not what one would call an artistic endeavor, which is more than enough for most to understandably turn their noses up at it. However, its cold calculation frequently gives way to some painfully catchy and fun songs that are hard not to smile at. The chrome veneer of metal does enough to elevate this pop novelty, making it fun and easier to digest for more discerning audiences even when the riffs feel more recycled than original. Many a metal band has been accused of channeling evil and the Satanic in their music, but this album and its hard to resist manufactured sound may be one of the most truly evil things to be spawned from the metal genre.