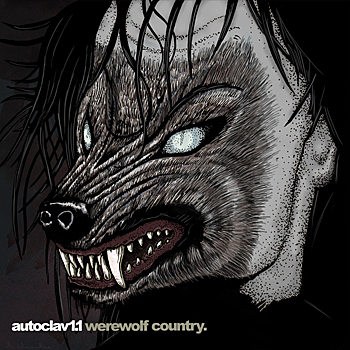 Autoclav1.1
Category: Ambient / IDM / Electronic
Album: Werewolf Country
Stars: 4
Blurb: Following through with the momentum established by his previous album, Tony Young treads some familiar ground with a fresh set of eyes and ears, making for one of his least derivative releases yet.

Having weathered through over a decade of making music as Autoclav1.1 and reinvigorating his creative juices with his association with WTII Records, Tony Young takes his listeners through yet another journey into the chilled ambient spaces that define his musical territory. Never one to stray too far from the foundation of what he has presented with his music thus far, with those ever present piano melodies and cold but inviting swells of pads amid tastefully programmed beats, Young’s trek through Werewolf Country is one that makes good on the promise of his previous album; he familiar elements are on display, but Young infuses some new ideas and approaches into Autoclav1.1 to make Werewolf Country one of his least derivative and most outstanding releases.

One need look no further than the title track as crystalline waves of icy atmosphere wax and wane with the subtle gusts of wind, driven purely by the tonal mood with nary a beat or melody in earshot. It’s a surprisingly dark ambient piece that is as disturbing as it is soothing, the occasional and distant synthetic howls evoking a sense of unease in the knowledge that a lycanthropic creature may be eyeing you for its next meal. On the opposite end of the spectrum is “Earworm” with its acidic synths evocative of dubstep or drum & bass making for an unsettling yet refreshing change of mode for Autoclav1.1, and while the pianos and organic melodies do continue to pervade pieces like “Amitriptylene Nun Chuff,” the sparse melody complementing the lush orchestrations of IDM rhythms and pads, “Tall Trails and Hate Trails” with its synthesized chorale and violin-like hums amid a bouncy 7/8 beat, or the metallic and industrially rhythmic “Nato Standard,” Young’s formula shows great refinement on Werewolf Country. With a scratchy synth refrain reverberating amid a deceptively simple hip-hop beat, plucks of harmonious keyboards contrasting with glitch-laden voices help “Twaddle” to sound like anything but, while “Just Do One” concludes the album with a burst of energetic beat structures topped off by smooth bass, trickling strings, and sampled voices that hint at a ritualistic procession.

For a project so based in electronic constructions of sound and ambience, it’s always refreshing when the organic elements of live instrumentation and the innate qualities of the human voice are utilized to create a fuller texture; such has been Tony Young’s modus operandi for over a decade with Autoclav1.1, with Werewolf Country demonstrating his dedication to his craft. All of the elements of his past work are present in abundance as the album almost feels like a return to the familiar roots of his earliest outings, which once again raises the concern about repetition in his sound and method; however, thankfully, Young does well to maintain the momentum that began with Ten.One.Point.One, returning to his roots with a fresh set of eyes and ears to create a new perspective on his music. Werewolf Country may not be his most urgent or bombastic album, but it’s one that solidifies Young’s place as one of the underground music scene’s most consistent and most prodigious artists.