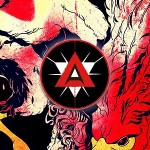 Music lovers were first treated to the sounds of Auradrone, fronted by the enigmatic and alluring Ms. Jon Mack, back in 2009 with the debut release, Whitelite Britelite. Now the L.A. based electronic act, which also includes Christopher Fudurich and Fred Traverso, is back with their sophomore album, Bleeding Edge. Featuring numerous collaborators from around the world, the album attempts to explore themes of love, loss, and life.

The album begins with a brief, almost industrial sounding intro that is heavy on abstract noise and sampling. It was a jarring introduction that launches the listener straight into “The Escape.” A darkly foreboding and sexy track, it is well accompanied by the music video, available on YouTube and via the band’s website. Mack sings, “I’m not here to serve your needs,” and it is easy to imagine her taunting gaze through her words.

From there, the album takes a groovy, futuristic bend. The video for “Shadow,” also available on YouTube, adapts the song’s dark themes and transforms it into a story of conflict set in a post-apocalyptic dystopia. The mellow, rounded notes of the synthesizers coupled with Mack’s whispered lyrics in “Starseed” brought to mind the emptiness and majesty of space, which culminates in “Blink of an I” where her voice alternates between echoing eerily and soaring with power. Finally, the album comes back to Earth as Auradrone offers up its last few songs on a more typical electronic, post-modern note with driving rhythms and synths, such as with the brisk and danceable “Ricochet.”

Jon Mack has an undeniably lovely voice and on many songs, she simply carries the listener from end to end with the power and intensity of her lyrics. The care and precision taken with their music videos is definitely something to be enjoyed. While at times lacking in a unifying vision, Auradrone still succeeds at tempting, and ultimately convincing, the listener to close his or her eyes and lose oneself in their dark glamour.