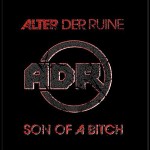 The lowest point on Son of a Bitch is “The Bread Snake of Lion’s Lamb,” a song as confounding as its title. It’s a messy pile of fluttering synth and chugging bass with spoken word vocals. There’s a decent melody almost discernible in the background, and the chanting midsection is good, but the stockpiling of sounds gets frustrating.

Most of the other tracks are promising, but overtaken by grating sound effects. “Snake Oil Salesman” is the worst offender with a beautiful, almost orchestral intro that quickly devolves into an annoying bleeping synth. The incessant bleeps overwhelm the rhythm of the vocals and the decent chorus. “You Owe Me Blood” is another example, where a strong fuzzy synth beat is undercut by a sputtering drum and fluttering sound effects. The straight techno beat on “It Speaks” is infectious and the dark airy synth adds a good counterpoint, but the spoken word vocals detract from the overall effect.

There are some bright spots where all the elements manage to come together. “Boozetooth” has a static, squealing rhythm that is intriguing rather than grating (like on “Snake Oil Salesman”), combined with a driving beat. “Ghosts” is as high a point as “The Bread Snake of Lion’s Lamb” was low, with a strong vocal, steady beats, with perfectly placed light synth accents and chimes, and a memorable chorus. Having disbanded shortly after the release of Son of a Bitch, it sounds as though Alter Der Ruine was still trying to find their way with this album, but the few very strong moments on this album indicate they were getting close. Perhaps the upcoming final release of There’s Always One More Son of a Bitch will yield finer results.