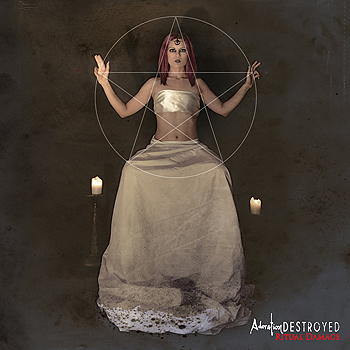 Erik Gustafson has been steadily working his way up the ranks of the electro/industrial scene, and with this debut album from his band Adoration Destroyed, he is poised to take a place in the upper echelon. With a virulent mix of modern dark electro and industrial/rock sensibilities, Ritual Damage offers up a complex range of styles that someone merges into a cohesive sound that, though familiar and sure to appease fans of the current wave of dark electro, is very much in a class all its own. One will notice from start to finish that the songs on Ritual Damage stick to a very particular rhythmic cadence, one that moves steadily and rather deliberately; an approach that certainly has its pros and cons, for while it does run the risk of no song truly standing out in terms of tempo, it does allow the songs room to breathe and build on the hazy atmospheres of shrill synths, thrumming bass, and sturdy, strident beats. In the absence of guitars, Jon Gilyeat’s bass and Gustafson’s synth riffs fill the distorted void quite well, particularly on songs like “Never Mine” and “In Elegant Decay,” both of which rock as viciously as if they did contain guitars. Similarly, Eirik Ashe’s live drums provide just enough of a forceful augment to the songs to give them that extra rock quality. All the while, Gustafson’s disaffected, almost nasal, and subtly effected vocals hover with a kind of emotional disconnect that reminds this writer of Tim Skold or SexyDeath’s Alex Frejrud in their less intense moments. In a song like “Carnal Dirge,” it adds a haunting element that at once enhances and contrasts with the song’s lascivious subject matter, and in the cover of Marilyn Manson’s “Coma White” adds that seething gothic touch that fans of the original will certainly appreciate. The same can be said the harmonization on “In Elegant Decay” and the layers of alternating call-and-response on “Torn Apart,” and “”Both of Me” is perhaps the catchiest track for its piercing vocal and bass line. Cynical Existence makes an appearance on “Nothing Left,” the strutting synth riff and rhythm providing an excellent backdrop for Fredrik Croona’s venomous screams in the chorus, playing a marvelous complement to Gustafson’s bleak melodies. On the other hand, while Gustafson is not without range in his voice, which is certainly at its best on “Both of Me,” there is a sense in songs like “Here to Bleed” and “Never Mine” with their unbridled instrumental aggression where his voice seems rather inert and almost monotone, which can diminish the power of the songs quite a bit. This is especially evident on the cover of Til Tuesday’s “Voices Carry,” for while faithful and effective, one does yearn for the end moments of the original when Aimee Mann becomes more unhinged and emotive, while Adoration Destroyed’s version seems to taper off in almost anticlimactic fashion; it’s a good cover nonetheless, and there is something to be said for the relative consistency of tone and ambience, broken mainly by the inclusion of two remixes by 16volt and Mr. Kitty, respectively. The 16volt remix of “Here to Bleed” deconstructs the wall of distorted synth down to percolating IDM-esque textures that at times sound almost oriental in mood and a sparse, bopping drum & bass beat, making for a wonderful tonal contrast from the original, while Mr. Kitty’s remix of “In Elegant Decay” ends the album in a dynamically danceable fashion with waves of shimmering and poppy synth arpeggios and sweeps making for an infectious version that many will surely enjoy on the dance floor. Overall, Ritual Damage is a strong first outing from a band that has much to offer, bridging the gaps between the more electronic and the more rock stylings of electro/industrial music. If Erik Gustafson can maintain this level of production savvy and quality songwriting, and hopefully improve on his vocal performance, then Adoration Destroyed will surely be a heavy hitter in the scene for many years to come.