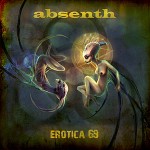 Absenth
Category: Industrial / Metal
Album: Erotica 69
Stars: 2.5
Blurb: Aggressive but impotent, loud but dull, and consistently technically sub-par, Erotica 69 is still capable of satisfying some basic cravings but will offend those looking for a solid mix of electro and metal.

Not until Erotica 69 was Russian industrial/death-metal hybrid Absenth hellbent on conquering the English speaking fronts. This latest release from the band that has been active on the native soil for more than a decade comes courtesy of Artificial Sun, the go-to exporter of industrial product from the Matushka Rossiya. But does an album plagued by some troubling technical shortcomings and permanently tied to the genre’s past iterations hope to win new, foreign audiences?

The piercing shriek of the album’s first track will surely penetrate and hurt even the most resilient listener’s eardrums. The setup of “Absenth” might be moody with scattered sounds slowly building towards the intense assault of guitars, but if it is to embody the band’s method and mission, it is little more but a babble, an incoherent and chaotic disarrangement of electro, acoustic metal fury, and gothic ominous atmosphere that tries to engulf them all. The peculiar, amateurish mixing and mastering of all these elements favors the swirling vortex of melodies over the vocals to the point where Oleg Govorov’s voice is embedded so deep within the structure of some tracks as to render it indecipherable. The sexual power of “Erotica 69” wouldn’t perhaps benefit from a better pronounced lyrical content, but too often Absenth puts the listener in the middle of a violent clash between the music and the words. This evident technical handicap not only puts in question Absenth’s assumed dominance of the Russian industrial/metal scene but also nullifies the appeal of the English vocals for international audiences. The record, forced to resort to aimless and endless waves of mean spirited metal, doesn’t lose its blunt brutish charm, but the electronic ingredient never occupies the same spotlight that the aggression of guitar does. Like oil in water, the two rarely blend together and although songs like “Virus” and the frenetically paced “Left Click to Play” briefly hint at this untapped potential, the Russian act never successfully follows in the footsteps of giants like KMFDM or Rammstein. The few surprises that occur in the record’s second half, courtesy of the more organic mélange of “Motorfest,” the tribal rhythms of “We Are Here,” and even the all out electro joy of the brief closing “To Ram!,” at least partially balance the monotony of the heavy, predictable chords and the persistently distant vocalization.

Almost all of the tracks on Absenth’s latest release religiously stick to one and the same template – from the initial dominance of synths, they transform into loud but dull displays of rock energy. And be sure that it’s a tired industrial/metal shtick that will only satisfy the most fleeting of urges, but can instantly and permanently exhaust those listeners that are more sensitive to the trauma of undiluted metal clutter. This attack of this Russian act on the western soil remains unsuccessful and only few will count among the captives of the Erotica 69’s familiar genre offensive.