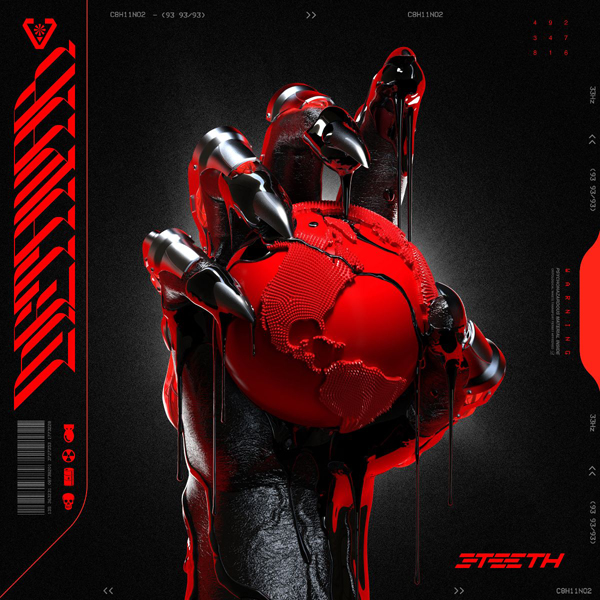 It has been interesting to watch 3TEETH evolve its sound as the band has steadily grown in popularity. The 2013 self-titled debut was slowly paced and atmospheric with Xavier Swafford and Andrew Means’ production sometimes overpowering Chase Brawner’s guitars, while Alexis Mincolla’s vocals were either minimal or buried under effects and pushed to the back as he mostly used a low pitch whisper/growl with occasional metal screams. At shows during this time, the band was largely stationary onstage with minimal interaction with the crowd, and while several music videos from this album were released, none of them actually featured the band. The follow up, <shutdown.exe> showed an increased confidence in the vocals as Mincolla’s vocals were brought forward and the songwriting had a more traditional metal quality, showing 3TEETH’s ability to write hooks. The live shows became more animated and the band interacted more with the audience and began to feature more prominently in the music videos. All of this, along with opening for Tool and Rammstein led to a large amount of anticipation for a new record. Then the band signed to a major label and began a large marketing push for what became METAWAR.

Right off the bat, one of the biggest differences on METAWAR is the addition of live drummer Justin Hanson; the drumming and percussion work on the previous two albums sounded fine, but in comparison to Hanson, they sound plain. After all, Means and Swafford were splitting their time between synths and programming drums, so having a dedicated drummer allows for more complex beats. His inclusion also seems to give the band more of an impetus to play faster songs, such as the opening track “Affluenza,” which bursts out with solid guitar lines and just races along with a driving 140BPM drumbeat. Brawner’s guitar work is more prominent than on the previous albums, where it was mostly used to bring in a heavy, memorable chorus. On songs like “Affluenza,” President X,” and “Time Slave,” his guitars are heard throughout the entire track, which does tip the balance toward the metal side of the dial, but luckily, didn’t lower the amount of industrial production – Means’ and Swafford’s production has always been the foundations upon which the songs were built, and they make great use of atmospheric pads and samples, although they are buried more in the mix on METAWAR due to everything else being pushed to the front. Mincolla’s vocals also take a leap forward in style as he branches out from the steadiness found in <shutdown.exe>, singing in higher ranges and using less effects; he takes some chances with his vocal performance and pulls it off nicely. If one didn’t have the buried vocals from the self-titled album to compare it to, it would be easy to think that Mincolla has always sung this well.

3TEETH decided to rerecord “Sell Your Face,” a single that had previously never officially received a fuller release. For METAWAR, it is fundamentally a different song other than some lyrics; at first, this writer didn’t care for it as much as the original as the older version was simpler and the hooks were more apparent. This new version has much more going on, and at times, it seemed like too much; however, after going back to the original version, “Sell Your Face 2.0” is a better song as it becomes apparent that the original chorus was much too repetitive, and while the production work was very good, there wasn’t a lot there. Put simply, this version has more depth and longevity. This writer’s favorite track on the album is “Blackout” – it doesn’t follow the usual verse/chorus/verse structure and starts off relatively soft with a little bit of everything going on before building to a bigger and heavier end. It seems like a different songwriting style and, except for the ending, sounds like it could have been a New Order song while still sounding distinctly 3TEETH. The last original song on the record is “The Fall,” which feels similar to <shutdown.exe>’s “Away From Me” in that it’s slow with a heavy beat and clear vocals, but unlike that song… or really any other 3TEETH song, “The Fall” has a melancholy feel, almost to the point of sadness; 3TEETH songs are normally filled with anger and spite, so the emotion on this song makes it stick out and makes for an interesting end to the album. Well, that is aside from the cover of Foster the People’s earworm of a song “Pumped Up Kicks,” which was suggested by a Facebook follower. It is a straightforward cover that is definitely heavier than the original, but not as much as everything else on the album – it’s right in the middle, so it’s easy enough for people that are already familiar with the original to recognize it and not feel that it is something only for metal or industrial fans.

METAWAR is a step forward for 3TEETH. It’s not as catchy as <shutdown.exe> or as atmospheric as the self-titled album, but each band member is improving in his respective area, and they aren’t taking an easy route of just trying to write hooks. Many of the tracks on the album are indeed rough and not primed for mass consumption, but as 3TEETH’s sound expands, the band is veering into territory already covered by the likes of Marilyn Manson and Rob Zombie, both of which you can easily make comparisons to; that doesn’t make it bad, but perhaps a little less special. But on the broader scale, METAWAR is an easy contender for one of the best industrial albums of 2019. To deal with an elephant in the room, so much of 3TEETH’s music is about anti-consumerism and the proliferation of a 1984 police state by way of Facebook and Google. But one of the band’s strengths has been creating and selling its brand; 3TEETH has become really good at marketing and has a large presence on the very digital platforms that are the proverbial “Big Brother.” This writer doesn’t have an answer for this contradiction; maybe it’s the only way to make a living in this business, or maybe in 20 years, we will see it as outright hypocrisy, or maybe we will look back at 3TEETH as industrial legends and the details won’t matter so much.