WaxTrax! announces remastered edition of landmark album from My Life with the Thrill Kill Kult0

Originally released on WaxTrax! Records in 1990, My Life with the Thrill Kill Kult’s second album, Confessions of a Knife… remains one of the benchmarks for the underground industrial music scene, with tracks like “Kooler Than Jesus,” “The Days of Swine & Roses,” “Ride the Mindway,” and “A Daisy Chain 4 Satan” still finding their way onto many a DJ set and achieving classic status. Now, to celebrate the album’s 30th anniversary, WaxTrax! has announced that the iconic record will be in print again; remastered from the original analog tapes, with new limited CD and vinyl editions now available for pre-order via the label’s website, Confessions of a Knife… will be released on October 23.
Along with the Standard Edition on black vinyl, the Hell-Fire vinyl variant is limited to 900 copies, while the Silver Messiah edition is strictly limited to a pressing of 666 copies; this variant features the album pressed on silver vinyl and includes a silver vinyl edition of the “Kooler Than Jesus” single with B-side artwork created by Thrill Kill Kult front man Groovie Mann. Also included in the package is a VIP pass and USB drive containing the album and six additional remasters, along with a patch, anniversary T-shirt, tote bag, and a 44-page art book featuring vintage art by Groovie Mann. As well, the first 150 orders for the Silver Messiah edition receive a custom prayer card signed by Mann and band mate Buzz McCoy. The CD includes the additional remasters of “Nervous Xians,” the remastered “Kooler Than Jesus” single, and the “Do You Fear (The Inferno Express?)” bonus track. Additional information on each variant can be found on the WaxTrax! webstore. 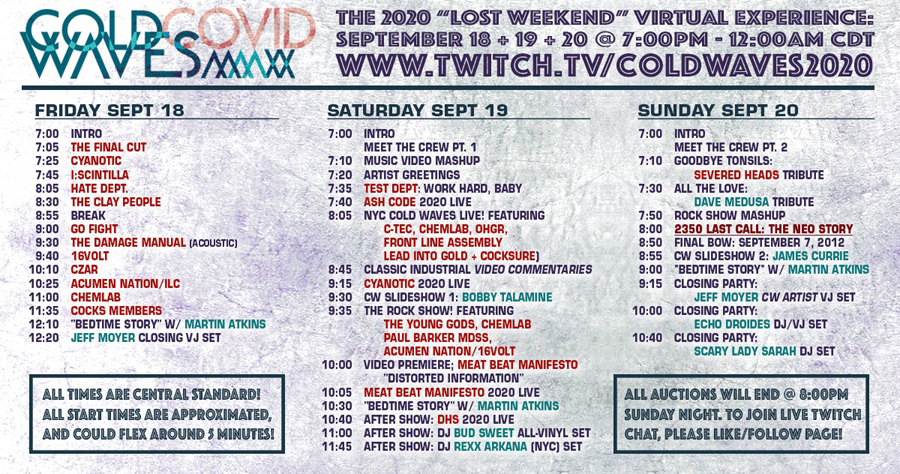 WaxTrax! will also be donating the Silver Messiah edition of Confessions of a Knife… to this year’s ColdWaves memorabilia auction. With this year’s “Lost Weekend” event taking place as a free virtual program via Twitch, the auctions are scheduled to conclude at 8:00pm CST on Sunday night; a full schedule and program listing for the ColdWaves 2020 “Lost Weekend” can be found on the event’s website. Today, September 17 also marked the unveiling of the ColdWaves 2020 Compilation via Bandcamp, which features Cyanotic’s remix of My Life with the Thrill Kill Kult’s “Forbidden Saints.” Other tracks on the compilation include Stabbing Westward’s cover of The Cure’s “Burn,” BILE’s “Children of the Gun,” and new tracks and remixes from Test Dept., The Young Gods, Meat Beat Manifesto, Cubanate, Severed Heads, and more!