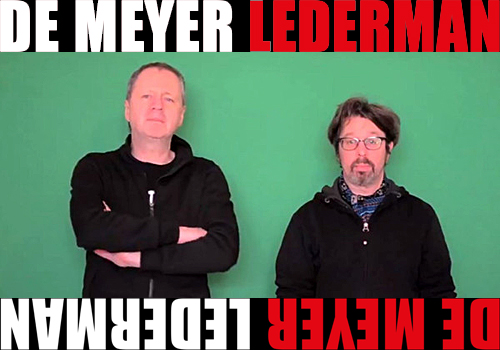 One of the electronic music scene’s most celebrated figures, vocalist Jean-Luc De Meyer has joined forces with talented musician Jean-Marc Lederman for a new project, Lederman / De Meyer, announcing the band’s debut album Eleven Grinding Songs via livecast video on Facebook on February 24. “All these songs are about human beings,” states De Meyer in the video, “their fears, their hopes, their dark side, their bright side; if you compare that to a landscape, that would be a landscape obscure by clouds, through which the sun regularly and brilliantly shines.” He further comments on the pair’s collective histories, stating that “you can hear bits and pieces that may resemble from Front 242, or The Weathermen, or Fad Gadget, or 32Crash, or Ghost & Writer, or Underviewer.” Eleven Grinding Songs will be released via Alfa Matrix as a digital EP in March, with plans to release in CD, double-CD, and limited vinyl editions at a later date to be announced. The band promises that the two artists are reaching for the height of their collective powers, with De Meyer proclaiming, “The day that you stop trying and moving forward, that’s the day you are done.”