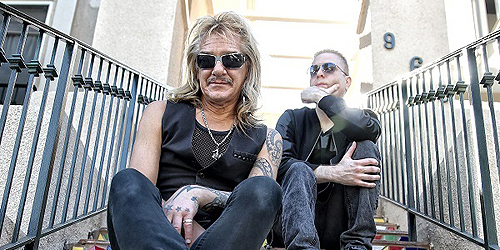 Nearly two years after the project’s formation, Los Angeles duo Trash Deity has announced the release of its debut album, Cross & Divide, via Metropolis Records. The collaboration of vocalist/lyricist Groovie Mann (a.k.a. Franke N. Nardiello) and producer/musician JDN (a.k.a. John D. Norten), the two veterans of the Chicago WaxTrax! era bridge their collective histories in the guitar driven heavy electronic scene with a modern production sheen. Groovie Mann is best known as the front man for My Life with the Thrill Kill Kult, while JDN esablished himself in Blue Eyed Christ. The band first appeared with the “Finger on a Trigger” single in late 2016 with the intention of releasing an EP to be titled Run 4 Your Lies!; the track “Run 4 Your Lies!” followed in summer of 2017, with both songs released as singles on iTunes with music videos created by photographer/graphic artist Neil Kull. Both songs will be appearing on Cross & Divide, which is scheduled for release on September 7 and is available for pre-order now via the Metropolis Records website and Bandcamp.