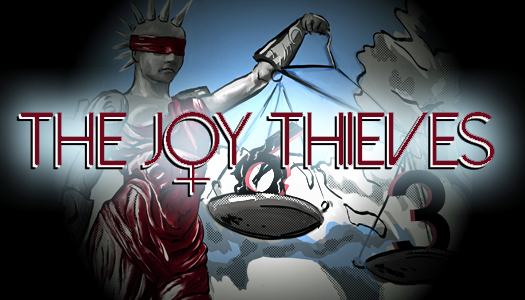 To say that the overturning of Roe vs. Wade by the U.S. Supreme Court earlier this year has sent spasmolytic ripples of outrage and fear throughout the country would be an understatement. As today – Friday, November 25 – also marking the International Day for the Elimination of Violence Against Women, it is as appropriate at is it necessary for musicians to show their support, as The Joy Thieves have with the release of the 6 to 3 EP. “We truly believe that any political attempt to restrict medical care for women is an act of violence,” states founding drummer Dan Milligan on behalf of the industrial and underground alternative collective, going on to say that the satisfaction of expressing anger over the injustice in song “wasn’t going to be enough… not this time.” Joy Thief member and Dissonance founder Cat Hall adds, “Supporting women’s rights and the rights of people of all colors and beliefs has never been more important than it is now. We cannot allow all that has been fought for to erode.”
The 6 to 3 EP presents three brand new tracks, supplemented by remixes from Stoneburner, GoFight, Eva X, and Stabbing Westward keyboardist Walter Flakus; released on Bandcamp via Armalyte Industries along with an accompanying T-shirt and hoodie line, 100% of the money raised will be given to the National Network of Abortion Funds. Milligan and the band say in conclusion, “If you agree that all women should have complete control over their own medical decisions, including the right to determine whether, when, and how to create a family… help us raise some much-needed money for an organization that is built for exactly that purpose.” The 6 to 3 EP follows the band’s cover of Pat Benatar’s “Love Is a Battlefield” with I Ya Toyah, released this past August as part of Riveting Music’s Regulate This! compilation for women’s rights.