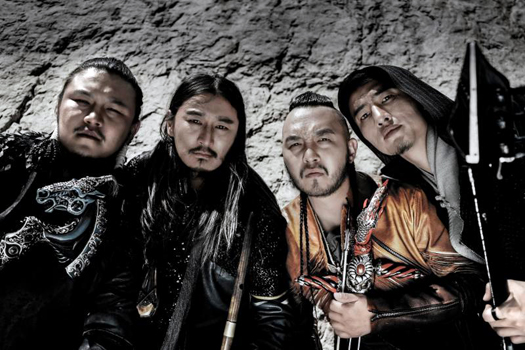 Having become an online sensation in late 2018 with the release of two music video singles, Mongolian rock quartet The HU has announced that it will be embarking on a European and U.K. summer tour to coincide with the release of The Gereg, the band’s debut album. Spanning 23 dates and featuring a number of festival appearances, which include Download in the U.K., Eurockeennes De Belfort in France, Tons of Rock in Norway, and Graspop in Belgium, the tour marks The HU’s debut on the global market, bringing their unique blend of modern American hard rock and traditional Mongolian instrumentation – a style the band refers to as “Hunnu rock” – to the masses. A full listing of tour dates can be found on The HU’s website, with tickets going online at 9:00am on Friday, May 3.
The HU, named for the Mongolian root word for human beings, was founded in Ulaanbaatar, Mongolia in 2016 by members Gala, Jaya, Temka, and Enkush with producer Dashka. The group first released the video for “Yuve Yuve Yu” in September 2018, immediately gaining attention for its incorporation of Mongolian throat singing and lyrics reflecting poetry and war cries of the band’s culture, set to a driving hard rock rhythm; other instruments used by The HU include the Morin Khuur (horsehead fiddle), Tovshuur (Mongolian guitar), and the Tumur Khuur (jaw harp), along with traditional rock percussion.The song reached the #2 position on 11 different charts around the globe before being followed up in November with “Wolf Totem” following in November and reaching the iTunes Rock Chart’s Top 5 position and the #1 spot on 19 different charts. The two videos have amassed a combined 24 million views to date.

For the release of The Gereg, The HU has signed with Eleven Seven Music (E7M), with the imprint’s COO Steve Kline stating that the label was “immediately blown away” upon first listen; he goes on to say, “The HU are about to take the world by storm, and we could not be more excited to welcome them to the Eleven Seven family!” Other acts on the E7M roster include Five Finger Death Punch, Mötley Crüe, and Papa Roach; of their signing, The HU comments, “We couldn’t be more excited to join the amazing team at E7M. The passion they have for The HU can be felt from New York to Mongolia and we’re excited to do great things together.” The Gereg, a term that means “the first diplomatic ‘passport’ issued by the Mongol Empire during the time of Genghis Khan (Chinggis Khaan), so his envoys could travel to many nations without any restrictions,” will feature nine songs, including the two singles, and is slated for release in 2019.

In April of 2019, the band was congratulated for its success by Mongolia’s Minister of Foreign Affairs, upon which he offered the quartet the title of “Official Mongolian Ambassador to the World.”