Today – Monday, June 27 – marks the beginning of the latest cycle from Stoneburner’s King of Wolves Tour, this time seeing the experimental industrial act joined by fellow noisemakers CHANT. With Stoneburner taking to the stage at The Crack Fox in St. Louis, MO, the tour will next see the band performing at the eminent Mechanismus festival in Seattle before CHANT joins for a month-and-a-half-long run – The Hydra Resurrection – that will hit such cities as San Francisco, Albuquerque, New Orleans, Nashville, Atlanta, Philadelphia, Chicago, Detroit, and the bands’ hometowns of Baltimore (Stoneburner) and Austin (CHANT). A full listing of tour dates and ticket links can be found on the bands’ websites. This past February, CHANT returned from a two-year hiatus from live performance following founder Bradley Bills’ injury in 2020; this marks the band’s first tour of 2022, later to be followed up by a North American tour with KMFDM in September. 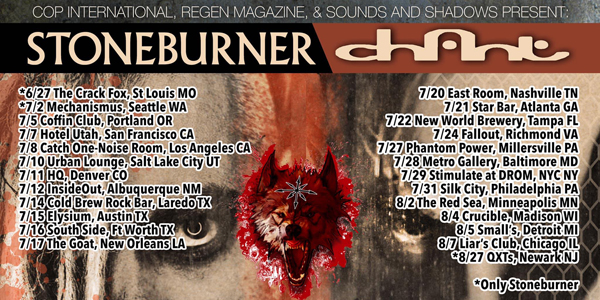 To commemorate the tour and give fans a taste of what to expect, a special split album has been assembled as a name-your-price item on Bandcamp. Released on April 16, this “tour freebie” features a helping of five tracks from Stoneburner’s 2021 album Apex Predator, along with three tracks from CHANT’s Hydra from 2020; additionally, a remix of “Revolt” from CHANT’s Strong Words For Strong People from 2010. The King of Wolves/The Hydra Resurrection is jointly sponsored by Sounds and Shadows, COP International, and ReGen Magazine. An earlier leg of the tour conducted in late 2021 saw Stoneburner sharing the stage in Baltimore with EBM legends Nitzer Ebb, along with D.C. industrial act Aertex; a photo gallery of this November 20, 2021 performance is forthcoming.

Stoneburner is also currently gearing up for the release of a new album, Annihilator – written over the course of one week in May of this year as what the band refers to as “process exercise.” 50 cassette copies will be available on the tour, with the official release to follow later in the year.