After the tumultuous events of the last year-and-a-half, many bands and artists are taking the opportunity to hit the road and perform live again; as such, industrial/metal crossover act Static-X has announced the Rise of the Machine North American Tour. Just as the “evil disco” band’s tour in 2019 celebrated the 20th anniversary of the Wisconsin Death Trip debut, the Rise of the Machine Tour does so for Static-X’s momentous sophomore outing, 2002’s Machine, with the tour scheduled to begin on February 21, 2022 in Portland, OR, with dates continuing until April 3 in San Francisco, CA. Although touring had been halted due to the pandemic, July of 2020 saw the release of Static-X’s Project Renegeration Vol. 1, which featured an amalgam of the final recordings of original vocalist and founder Wayne Static.
Joining the band on the lineup will be fellow industrial/metal trailblazers Fear Factory, with the tour serving as the introduction to the group’s new vocalist – yet to be announced – following the highly publicized departure of founding member Burton C. Bell prior to the release of this year’s Aggression Continuum; as well, bassist Tony Campos will be serving double duty as a member of both bands. Showcasing Bell’s final recordings with the band, Fear Factory’s tenth album was released on June 18 via Nuclear Blast.
Also acting as support on the Rise of the Machine Tour will be DOPE, with whom Static-X toured in 2019, and whose founder and vocalist Edsel Dope now serves as front man for Static-X under the guise of Xer0. Also appearing as special guests on select dates of the tour will be Mushroomhead and Twiztid; a full listing of tour dates will be available on each of the bands’ websites, with tickets going on sale on Thursday, September 16. 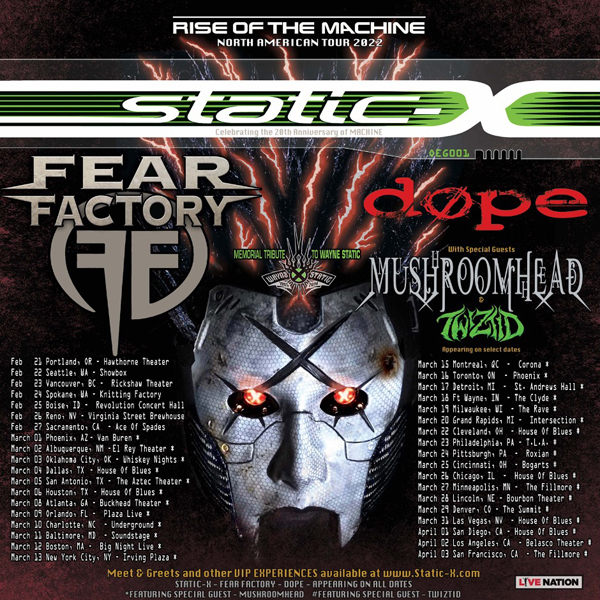