Following the July 15 release of the new single “The Dark,” Skum Love continues to partner with the You Rock Foundation with the announcement of a benefit performance on Sunday, August 29. Taking place at the famed Whisky A Go Go in Hollywood and hosted by Jes Fama, the night will see the dark rock and industrial/metal band sharing the stage with L.A. metal bands Fate DeStroyed and The Mendenhall Experiment, as well as death rock supergroup Symbolism; presented by M Productions Devils Union and Raquel Figlo PR, and in association with You Rock, the event is intended to raise awareness for mental health and to continue the foundation’s efforts to prevent youth suicide and address issues of depression. As well, a special guest panel speaking on mental health in the music community will be held before the show. As the band’s front man and namesake, Skum Love will also be celebrating his birthday on this all ages occasion, with $10 advance tickets and $12 at the door; additional info can be found on the venue’s website. 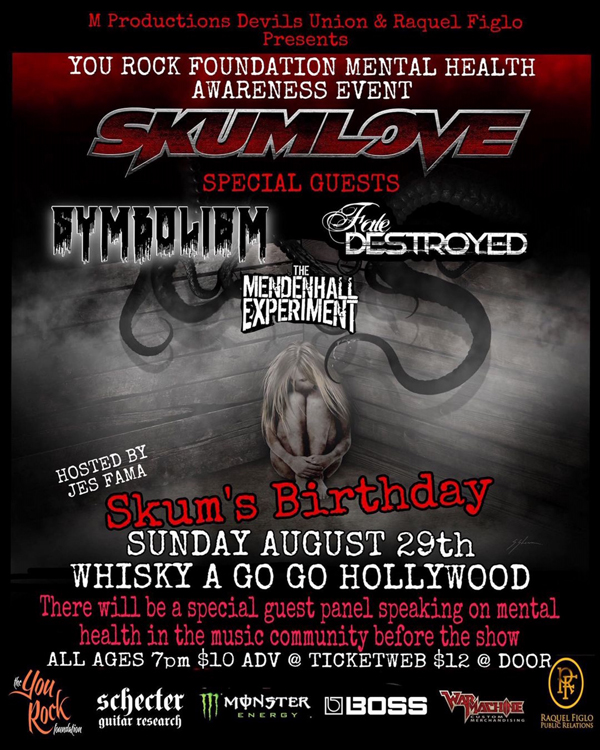 Formed and fronted by musician/model/fire breather Franccesca De Struct, who had previously played bass in The Dreaming (featuring Bost) and Kuza, while Symbolism features ex-Christian Death members James McGearty and Rikk Agnew, as well as ex-Samhain drummer London May, and vocalist DEViX of The Banishment and formerly of Stayte. The Mendenhall Experiment has stood in support of various nonprofit organizations, particularly showing solidarity for disabled awareness; the band’s founder, Brandon Mendenhall was born with cerebral palsy, which restricted movement on his left side, a condition that he has overcome throughout his life in order to follow his passion for music with a positive message.