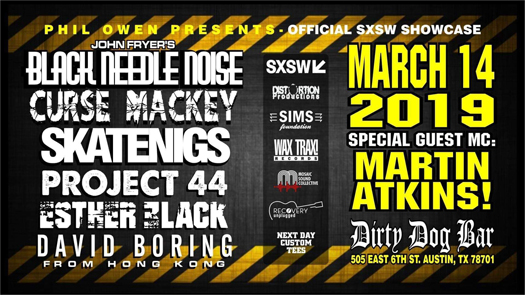 Phil “Phildo” Owen, best known for his work with industrial/alternative bands Skatenigs and Revolting Cocks, will be presenting a special showcase at this year’s SXSW festival, featuring an all-star lineup of some of the scene’s most celebrated acts. Among the performing acts are Owen’s own Skatenigs, as well as the world premiere of John Fryer’s Black Needle Noise featuring Betty X on lead vocals, David Boring from Hong Kong, Esther Black, Project .44, and Curse Mackey. Also appearing as a special guest MC will be drummer, entrepreneur, and Pigface founder Martin Atkins, along with prizes and giveaways in association with WaxTrax! Records and Distortion Productions. Other sponsors for the event include Recovery Unplugged and Sims Foundation, which provides support for musicians and their families dealing with issues of mental health and substance abuse, and Mosaic Sound Collective (MoSoCo), which offers resources to support sustainability in the creative community.
With this year’s SXSW running from March 8-17, the Phil Owen Presents SXSW Showcase takes place on March 14 at the Dirty Dog Bar in Austin, TX. Attendance is limited to those registered with SXSW, by wristband from SXSW online, or physical locations in town; further information can be found on the SXSW website.