Austin electro/industrial act SINE has unveiled a new single and music video, titled “Desolate District,” making its premiere on Revolver. Although written in December just prior to the onset of the COVID-19 pandemic, the lyrics resonate with the current waves of social isolation and unrest, with SINE’s Rona Rougeheart collaborating not only with regular musical partner Curse Mackey, but also with celebrated industrial and alternative musician Chris Connelly. Rougeheart explains that although she had met Connelly through Mackey, the two being alumni of industrial collective Pigface, “I never really got to talk to Chris much until November 2019 when Pigface played their last show of the tour.” Connelly goes on to say that he “felt a strong connection to SINE’s music,” calling it “compelling and intelligent and that always pushes me in a very inspired direction.” Mastered by Chase Dobson, the single is now available to purchase via Bandcamp, with the music video directed, edited, and produced by Rougeheart using D.I.Y. footage of herself in Austin, Connelly in Chicago, and performer Sher Chew in Singapore. Furthermore, a livestream event will be held at 7:00pm CST on Facebook tonight, June 5, in which Rougeheart, Mackey, and Connelly will discuss the new single and video and answer questions from fans; additional information can be found on the Facebook event page. 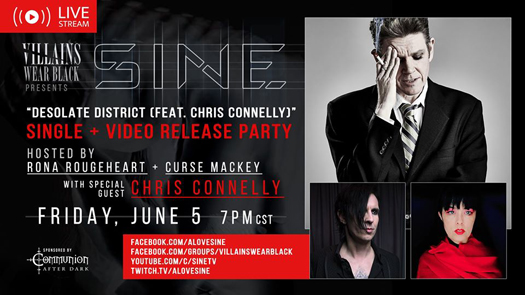 SINE released the INSOMNIÆ debut album in January 2019, followed by the “Control” single in October and the aforementioned Injected EP in November. Additionally, she and Mackey have worked extensively with Bauhaus bassist and solo artist David J during his most recent touring cycles. Known for his numerous collaborations and musical and artistic outlets, Connelly most recently completed a virtual book tour for his latest publication, The Heart Has to Ache Before It Learns to Beat, a collection of numerous works of poetry and lyrics spanning his extensive discography.