Taking place on Saturday, May 13, 2023 at the Las Vegas Festival Grounds will be the Sick New World Festival, showcasing a wide assortment of alternative bands from across the stylistic spectrum. With pre-sale tickets to go on sale on Friday, November 11 at 10:00am PST, the festival will encompass multiple stages of varying sizes around the grounds, with the band lineup and set times to be announced closer to the festival date. Although primarily spearheaded by denizens of the nü-metal and dark rock mainstream, the diverse lineup of bands also includes such underground legends as MINISTRY, KMFDM, Killing Joke, Skinny Puppy, The Birthday Massacre, HEALTH, London After Midnight, My Life with the Thrill Kill Kult, and The Sisters of Mercy, along with Filter, Orgy, Stabbing Westward, She Wants Revenge, and even experimental and dark hip-hop acts like Death Grips and Ho99o9. Other acts on the bill include the likes of Cradle of Filth, Lacuna Coil, Body Count, Cold, Failure, Melvins, The 69 Eyes, and Ville Valo, while the headliners include KoRn, Deftones, System of a Down, Incubus, Papa Roach, Chevelle, Placebo, and Evanescence. Additional info on the festival, including location and ticket links can be found on the Sick New World Fest website. 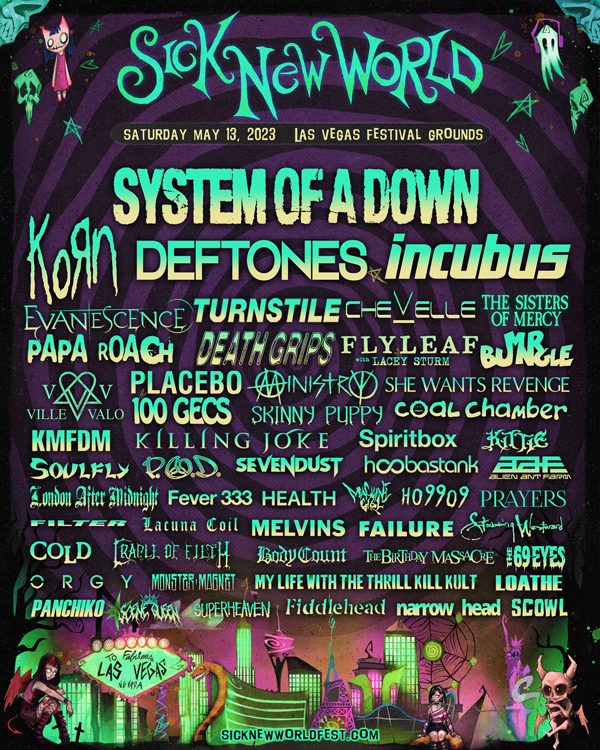