She Wants Revenge is proving to be the habit that Justin Warfield and Adam Bravin can’t seem to break, having already disbanded twice before. Now, the dark alternative band seems to be making yet another go of things with the announcement of a Summer tour of the West Coast, the band promising that the set list will please fans old and new alike. “Adam and I made individual lists of what we’d most like to play live, and they were actually quite similar,” Warfield says explaining that the pair are focusing on their personal favorites to represent their shared musical tastes and current mindset. Following the last dissolution of She Wants Revenge in 2020, what Warfield called the culmination of “an incredible, fruitful, creative, yet challenging partnership,” he goes on to say that he felt the desire to revive the band and play live again after he himself started to attend concerts again in the wake of the lockdowns; “Being without live music for such a long stretch during the pandemic was devastating not only as a fan, but also as a musician,” he goes on to say, with he and Bravin speaking for a month about their working relationship and willingness to bring the band back on what they hope will be a more permanent basis. “We really just want to continue to grow, both creatively and in reach,” Warfield says in conclusion, “We know who we are as a band, but we’re also not the same guys who made that first record, so musically, there’s a lot left for us to explore.” With Warfield on guitar and vocals, and Bravin on synths and keyboards, the band will be rounded out by Thomas Froggatt on bass, Spencer Rollins on guitar, and drummer David Goodstein, marking the first time She Wants Revenge will be touring as a five-piece. The Disappear Tour 2022 will run from August 11-27, with stops including Las Vegas, San Diego, Portland, Seattle, Boise, Salt Lake City, and San Francisco; a full listing of tour dates and ticket links can be found on the band’s website. 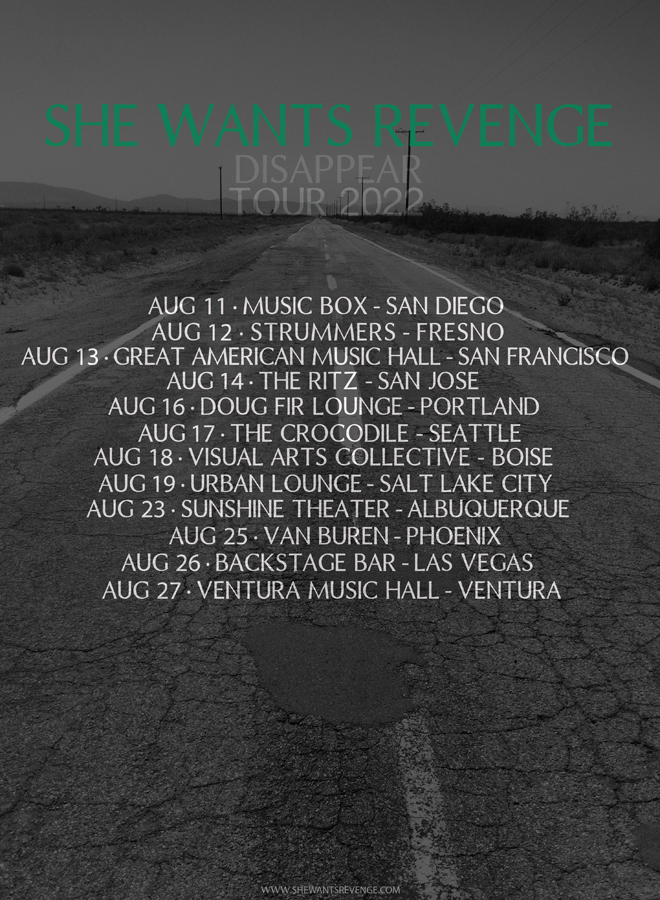