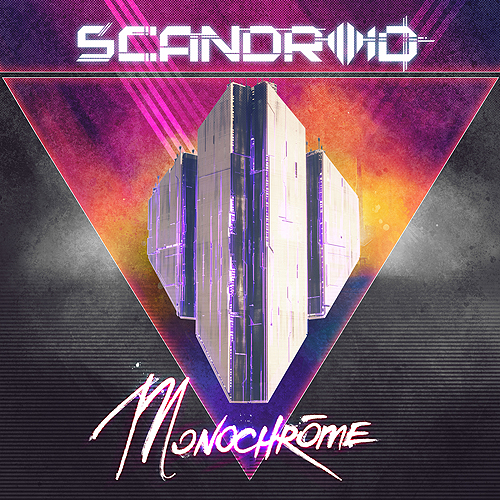 Scandroid, the synthwave project of Klayton, has announced the release of a second full-length album, titled Monochrome. Following on the success of the self-titled debut and continuing the artist’s musical exploration of futuristic sci-fi worlds, the album features 14 tracks revolving around the theme of hidden truths as explored by the Red and Aphelion in the cyberpunk setting of Neo-Tokyo in the year 2518; among the new tracks are the singles “Rendezvous” and “A Thousand Years,” as well as Scandroid’s cover of composer John Williams’ Star Wars opus, “The Force Theme.” Also included on the album will be a new cover of Michael Jackson’s “Thriller,” and a remix by synthwave producer Pylot; the song will be released as a single on October 13, with Monochrome to follow on October 27. Other tracks on the album include instrumentals “Oblivia” and “Searching for a Lost Horizon,” along with vocal tracks like “Afterglow” and “Future Bloodline.”