As global support for Ukraine mounts in the artistic community, several Russian acts have also joined in speaking out against the conflict; among them is the enigmatic duo of IC3PEAK with the release of “Dead But Pretty.” Further showcasing the band’s blend of dark electro and metal, the song is the latest in a series of singles following the 2020 До Свидания (Goodbye) album, with the song supplemented by a darkly whimsical music video created by IC3PEAK’s Nick and Nastya. “Dead But Pretty” also appears in the wake of the band having canceled upcoming Russian tour dates, offering the statement that IC3PEAK “can’t perform in Russian while the war is going on and won’t be safe during the tour because of our clear position against it,” with futher comments against propaganda, police surveillance, and censorship that is rampant in Russia at this time, as well as expressing continued support for and participation in peaceful protests against Russian President Putin and his government – the full statement can be read on the band’s Instagram. In addition, the pair has pledged to donate a portion of earnings from the remaining European dates of the Horror Show Tour to organizations supporting the Ukrainian population; running from April 28 to May 25, IC3PEAK will be performing in Belgium, Estonia, Poland, Germany, Switzerland, Spain, the Netherlands, the U.K., and more, with a full listing of tour dates available via the band’s website. 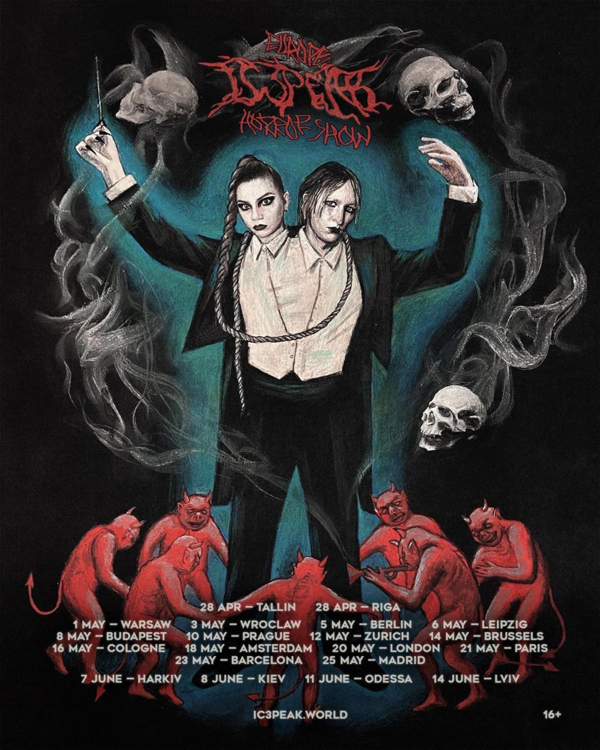