This December marks the maiden launch of Flesh & Steel, a new festival event “celebrating the intersection of humanity and machinery.” Appropriately named after the SPK track from the 1985 Machine Age Voodoo album, the event will be spanning three nights in multiple venues, hosting a bevy of artists and DJs in the realms of EBM, darkwave, industrial, coldwave, presented by L.A.-based promotional team Restless Nites in partnership with David Castillo of Saint Vitus and Andi Harriman of Synthicide; Restless’ Brian Tarney states, “There is a bounty of that rare synergy of community and culture between Restless Presents, Saint Vitus, and Synthicide whose visions align on opposite coasts.”
Spanning the first three nights of the month, December 1 will take place at Saint Vitus Bar, December 2 at Knockdown Center, and December 3 at The Meadows with a late event the same night at Good Room, all located throughout Brooklyn, New York. Among the performing acts will be Boy Harsher, Parade Ground, A Split-Second, Psyche, RIKI, Soft Crash, Phase Fatale, Ms. Boan, Un Hombre Solo, and more with DJ sets by Harriman, Castillo under his CONFINES moniker, Boy Harsher’s Gus Muller, Kontravoid, Becka Diamond, Disko Obscura, and Sharlese; a full listing of performers and DJs, as well as a complete event schedule, and ticket links can be found on the Flesh & Steel website and the Facebook event page. 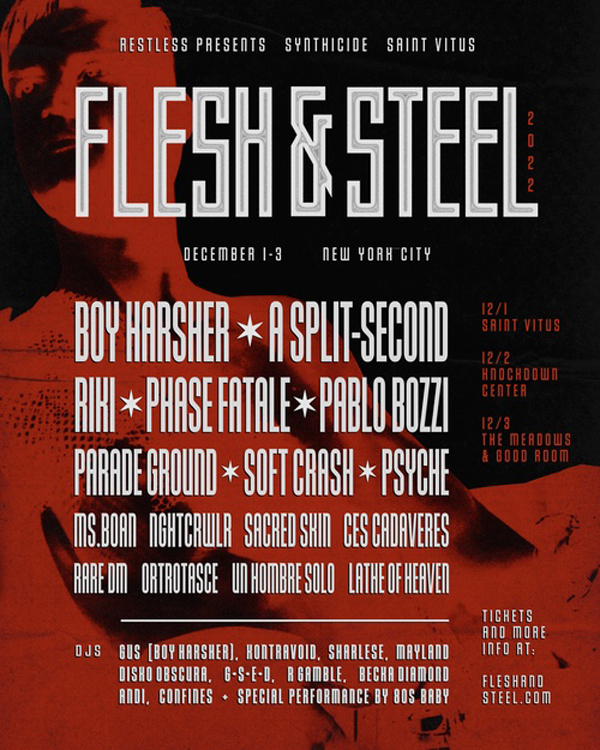