ReGen Magazine has the great pleasure of presenting the 2021 Sanctuary Festival, now taking shape as a five-day tour of the Midwest. Following the New Music Madness livestream event earlier this year, the tour was formulated as an extension of the Milwaukee event to celebrate its fifth anniversary, with German/Mexican hard electro duo Hocico originally booked as headliner amid the band’s long overdue U.S. tour; those plans were sadly curtailed when the band were denied proper visas, with the Sanctuary Tour now featuring the eminent electro/rock band Julien-K in the headlining spot. Among the other bands featured on the tour are Cyanotic, KANGA, Pixel Grip, Luna13, ∆AIMON, Project .44, Choke Chain, Absynthe of Faith, For All the Emptiness, Satanic Hispanic, Subspace, BioCarbon13, Rare DM, ECTO, and Order of the Static Temple; the tour will include the following dates (with ticket links): 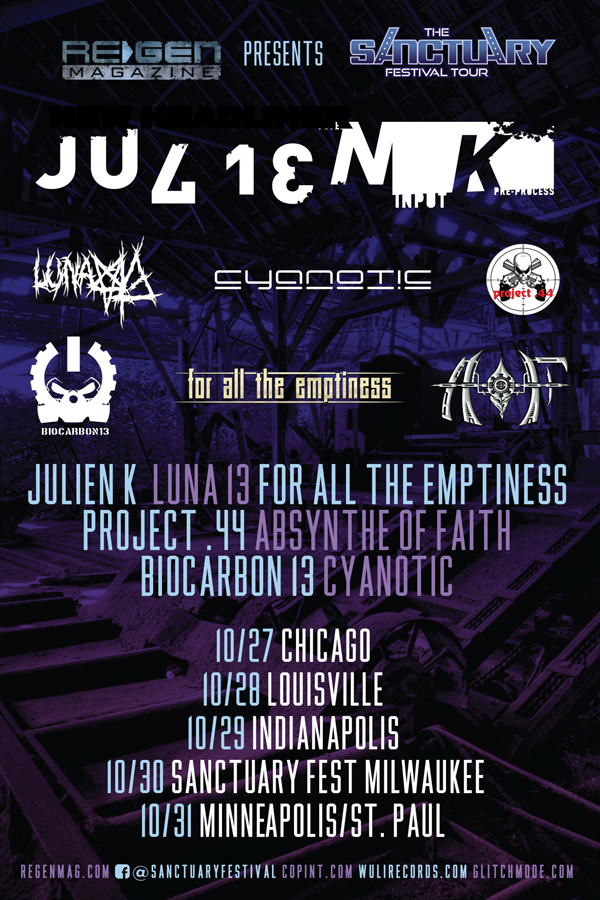 The Sanctuary Festival Tour 2021 marks the third occasion in which this publication has been listed as a sponsor, in association with prominent underground music labels COP International, Glitch Mode Recordings, and Wuli Records. ReGen Magazine wishes to express its gratitude to the curators and bands of the Sanctuary Festival.