Psyclon Nine has been one of the highest selling artists on the Metropolis Records roster, with this year’s release of Less to Heaven being no exception. As part of the tour plans in celebration of that record, the band has been announced as a headlining act at this year’s Dracula’s Ball in Philadelphia, presented by Dancing Ferret Concerts; one of the goth/industrial scene’s most widely attended and revered parties, this year’s event will be taking place at Underground Arts on Friday, October 28. Joining Psyclon Nine on the bill is Cleopatra Records artist Ships in the Night, bringing her atmospheric brand of darkwave and dreamy synth-laden melodies as a balancing contrast to the headliner’s renowned sharpened industrial and dark metal. Spinning a mix of industrial, goth, post-punk, and other underground alternative sets will be DJs Chas Paris and Mindsolvent, with tickets for the event available now via SeeTickets; additional information can be found on the Dracula’s Ball Facebook event page. 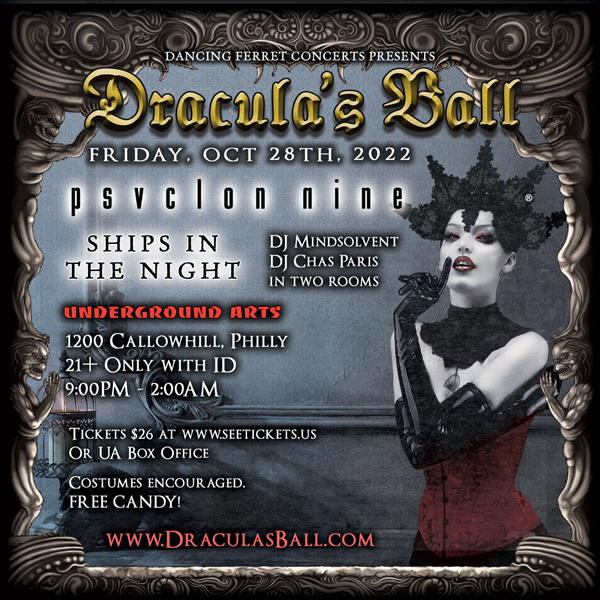 In addition, Dancing Ferret Concerts head and Dracula’s Ball organizer Patrick Rodgers has recently curated the latest edition of Asleep By Dawn Magazine’s compilation series, the fourth entry in the From the Vault series. Released on September 16 and available now on Bandcamp, the collection features 22 tracks from the likes of Faith and the Muse, Mentallo & The Fixer, Sheep On Drugs, Vigilante with John Bechdel, Imperative Reaction, kHz, E-Craft, Death Ride 69, Shriekback, Kite, and more, all mastered by Eric Oehler at Submersible Studios. According to the compilation notes, this is the first time the track order was selected specifically to be heard in succession, with several of the tracks no longer or having never been available digitally.