<PIG> celebrates the holidays with a new EP0 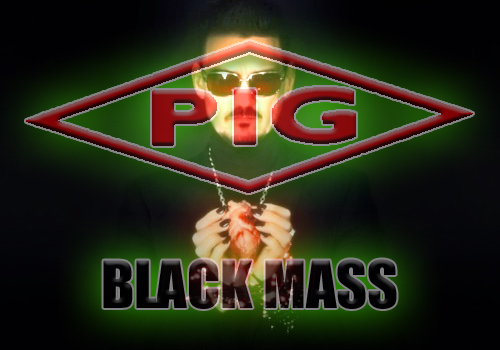 2018 has been a momentous and productive year for <PIG>, having released the Risen album, a collaboration with Sasha Grey reinterpreting the disco classic “That’s the Way (I Like It),” performing guest vocals on the new single from Philadelphia act REVillusion, and conducting the Hell to Pay… in the USA tour and supporting Killing Joke in North America. Now, the Mighty Swine gets into the holiday spirit with a new EP of festive filth, titled Black Mass, due for release on December 7 via Armalyte Industries.
Of the EP, Raymond Watts comments, “I wanted to pay homage to the great Christmas songs, have fun with them, but also take a stand against the ever rising tide of toxic bigotry in this increasingly brutal world while remembering there is a better part of ourselves.” As such, the three tracks on Black Mass showcase Watts’ reinterpretations of Christmas songs by John Lennon, Elvis Presley, and WHAM!. Watts specifies the cover of Lennon’s “Happy Christmas (War Is Over)” to be particularly representative of the EP’s intent to stand against intolerant attitudes, “whatever your beliefs may or may not be,” while paying tribute to WHAM!’s George Michael, who died on Christmas 2016 at the age of 53 with a rendition that “represents the fleeting nature of ‘the season of goodwill.'” Finally, he pays homage to the King of Rock & Roll with “Blue Christmas,” a track he says “resonates with anyone who is separated from a loved one at this time of year, whatever the reason, war zone or weather.”
Black Mass will be available as a pay-what-you-want item on Bandcamp, with all proceeds going to International Rescue Committee. Founded in 1933, the IRC is an organization that responds to humanitarian crises with aims to help people recover and survive – a global leader in emergency relief and the protection of human rights. Armalyte Industries states that while the EP can be enjoyed for free, “a minimum donation is appreciated.”