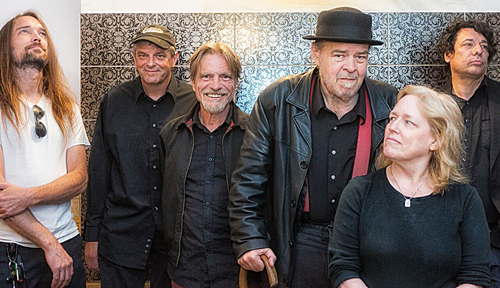 Swans steel guitarist Kristof Hahn will be joining experimental rock group Pere Ubu on the upcoming U.S. tour for the band’s new album 20 Years in a Montana Missle Silo, which will be released on September 29 via Cherry Red Records. Of his inclusion on the album, Hahn states the process of file sharing and exhanging songs and recordings was “like walking through a dark, unknown landscape, listening for noises and sounds as landmarks while trying to add something that blends in with everything else.” The MonkeyNet Tour is slated to begin on November 8 in Pittsburgh, continuing until December 8 in San Diego; a full listing of tour dates can be found via the Pere Ubu website, with front man David Thomas referring to the tour name as, “n infinite number of monkeys clicking on an infinite number of links will yield nothing but an infinite number of bananas.” Commenting on his role in expanding Pere Ubu’s guitar section, Hahn includes, “As we all know, guitar players attract girls. Girls attract boys. And the more girls and boys come to the shows, the more T-shirts and albums the band will sell.”