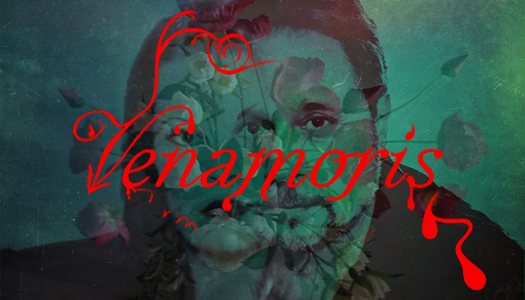 Three One G Records has unveiled the new single from the husband-and-wife duo of Paula and Dave Lombardo, collectively known as Venamoris. Signalling the impending release of the band’s Drown in Emotion full-length album, “Let Me Be” demonstrates the pair’s brand of darkened pop, driven by the smoky vocals and piano melodies of Paula, with Dave providing drums and additional production; both the single and the album were the result of the two sharing “many late nights with too much wine,” with Dave convincing Paula to return to music and songwriting after a long absence – prior to Venamoris, she had been a lead backup singer for Wayne Newton for a decade, a fact she had shared hesitantly with the renowned drummer whose credits famously include Slayer, Misfits, Mr. Bungle, and more. Of her demos that she had been recording over the years, Dave goes on to say, “I was floored by her sonically soothing, rich tone, and natural, instinctive ability to harmonize.”

With lyrical themes revolving around a broad range of emotions, Drown in Emotion proves to be an appropriate title for the band’s first release, with “Let Me Be” and its corresponding video by Displaced/Replaced offering a taste of the intimacy and vulnerability Venamoris presents. The album due is for release on February 10 in digital and limited edition vinyl, with pre-orders available on Bandcamp and Three One G Records. Dave Lombardo recorded, produced, and mixed Drown in Emotion, which will also feature guest performances by score composer and producer Tyler Bates (Jerry Cantrell), Ra Diaz (KoRn, Suicidal Tendencies), Jack Gibson (Exodus), George Pajon (Black Eyed Peas, Cairo Knife Fight), and Tim Stewart (Lady GaGa, Damnage Gooods).
Founded by the Lombardos in 2021, Venamoris made its debut with the standalone holiday-themed single “The Gift” on December 19, 2022.