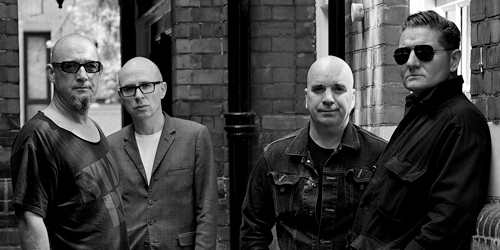 Following the announcement earlier this year of Pylon Records’ 10 LP box set, the trailblazing EBM act known and beloved as Nitzer Ebb has unearthed a long lost music video of the band’s 1985 single “So Bright So Strong,” which made its premiere on September 11 via Revolver Magazine. Shot by the band’s original manager Chris Piper in either 1983 or 1984 at a farm often frequented by the group for parties and rehearsals, the video showcases the Nitzer Ebb audio and visual style at its most prototypical, with Bon Harris, Douglas McCarthy, and David Gooday creating a youthful and energetic display of danceable and percussive electro/punk vitality. Fans will recognize the aesthetic as it would be honed and perfected in later larger budget outings and in the band’s live show. Stating that his recollections of this period in Nitzer Ebb’s history are “incredibly vague,” Harris refers to the video as “the logical extension of do it ourselves,” and that “it pretty much signals something any creative artist is going to face, which is working with what you have at the time, embracing whatever the limitations are, and going ahead with creating something, putting something out there, the type of work that you want to see without any judgment or self-consciousness.”

The Nitzer Ebb: 1982-2010 box set is due for release on October 5 via Pylon Records, with pre-orders now available via the label’s webstore and Storming the Base. In addition, the original NitzerEbbProdukt lineup of Bon Harris, Douglas McCarthy, David Gooday, and Simon Granger will be reuniting to perform at Cologne, Germany’s Amphi Festival on July 20, 2019, with further dates currently in the works.