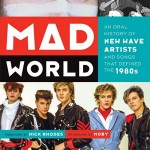 Authors Lori Majewski and Jonathan Bernstein have released their book Mad World: An Oral History of New Wave Artists and Songs that Defined the 1980s, celebrating seminal acts of the 1980s. “This was an era that was crammed with classic songs,” says Majewski about the subjects of the book. “Whittling them down to one book was like a UFC cage match… I wanted Paul Young’s ‘Come Back and Stay;’ Jonathan was adamant that ‘Dr. Mabuse’ by Propaganda be included. In the end, we both lost out. There was just too much good stuff. It’s hard to imagine doing a book like this about music today. What would we fight over? Which Pitbull song means the most to us?”
Majewski and Bernstein celebrated the book launch at the Housing Works Bookstore Cafe in New York on April 20. Guests and performers in attendance included Vince Clarke (Depeche Mode, Erasure, Yaz) DJing the event, Rod Thomas (Bright Light Bright Light), Del Marquis (Scissor Sisters), and Andy Rourke (The Smiths). “I’ve done a million interviews in my time,” said Rourke, discussing his contribution to the book. “I figured I’d make it fun for people and tell a few stories. I’ve got a big mouth sometimes, pardon the pun.” Rourke, a longtime contributing editor for Rolling Stone Magazine, went on to analyze the new wave influence on current pop stars, such as Rihanna’s sampling of “Tainted Love” in her hit song “SOS.” Rourke added that new wave-era artists “really put rhythm first, and that’s why it holds up so well — they respected the beat.”
Featuring a foreword by Duran Duran founder Nick Rhodes and an afterword by Moby, Mad World is available now through various online retailers.