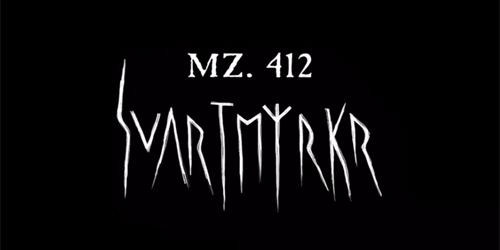 Widely regarded as the originators of black industrial, Swedish group MZ.412 has announced its first full-length album of new material in 12 years, titled Svartmyrky. Dedicated to Hel, the giant goddess who rules over Helheim (the “true hell of the north” in Norse mythology), the band strives on this new record to retain the harsh malevolence of the past while reinventing its classic sound, blending elements of industrial, black metal, and ambient to “blur the lines between music, magick, and reality.” With 2018 marking the group’s thirtieth anniversary, the album was composed, recorded, and produced by the core trio of Henrik “Nordvargr” Björkk, Jouni “Ulvtharm” Ollila, and Jonas “Drakh” Aneheim over the last three years; additionally, the album features guest performances by guitarist Kristoffer Oustad and Siegfried Meinertz providing additional atmospheres and vibrations. Svartmyrkr is due for release on February 8, 2019 via Cold Spring; it will be available in CD and vinyl formats, with pre-orders now available via Storming the Base, and the MZ.412 and Cold Spring Bandcamp pages.