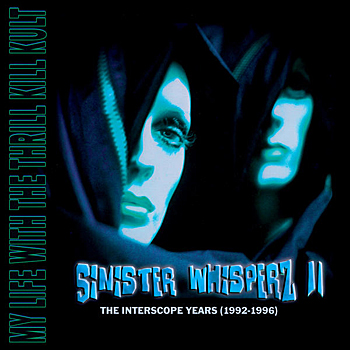 Legendary industrial/disco act My Life with the Thrill Kill Kult has announced the release of Sinister Whisperz II: The Interscopr Years (1992-1996) on December 13 via the band’s own SleazeBox Records; this marks the second in a series of compilations featuring new alternate mixes of the band’s best known and notable tracks, with this entry covering Thrill Kill Kult’s “major label” years on Interscope Records. Among the songs featured on this collection is a new mix of “After the Flesh,” which the band performed in a cameo appearance in the 1994 cult action movie The Crow; other tracks are culled from the albums Sexplosion!, 13 Above the Night, and Hit & Run Holiday, covering the band’s four year tenure as one of the first artists to sign to Interscope in 1992. Sinister Whisperz: The WaxTrax! Years (1987-1991) was released in 2010, making this second compilation a much anticipated treat for fans of My Life with the Thrill Kill Kult. Pre-orders for Sinister Whisperz II can be found via the SleazeBox Records website.